The Greatest Games Of All Time

What is the greatest hockey game of all time? 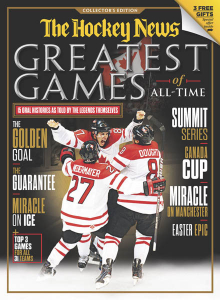 That is the focus of the new collector's edition issue of The Hockey News. It's a beautifully laid-out collection of oral histories as told by the legend of hockey themselves.

THN groups the games into three distinct categories: NHL, International, and amateur. They also name the top three games for each NHL franchise.

In Canada the cover features the Crosby's Golden Goal at the 2010 Olympics. In America the cover has the 1980 Olympics Miracle On Ice.

Which is fitting because reality is the greatest games of all time are seemingly all on the international stage. The NHL should take that into consideration before making the final decision about the Beijing Olympics.

It really is amazing, I think, that there are not so many NHL games universally hailed as the greatest games of all time. I guess that speaks to the many different allegiances across a league that has 31 teams now. Most fans in any given market may not have even seen, let alone much cared about, an all time great game in another market.

THN names the LA Kings Miracle on Manchester upset of the Edmonton Oilers in 1982 as the greatest NHL game of all time. It is much celebrated of course, because it was a rare misstep in Wayne Gretzky's career. There have been plenty of crazy comebacks in the Stanley Cup playoffs. If Gretzky wasn't involved in this one, it would just be another wild game.

In reality almost no one saw that game. As always the East Coast was sleeping in bed before the West Coast game even started. And while the game winning goal is Daryl Evan's claim to fame, but most people can not name who scored the Miracle goal.

Also named is the 1987 Easter Epic. The dramatic game seven  between Washington and the New York Islanders went to four overtimes. Which oddly means much of the East Coast was asleep again.

Then there was the "Too Many Men On The Ice" game between Boston and Montreal in 1979. Another epic collapse but perhaps over-celebrated because of celebrity Don Cherry's presence.

Oh yes, we have to have the New York Rangers win over New Jersey in 1994, courtesy of Mark Messier's guarantee. And add the 1936 six overtime marathon game some 80 years ago between Detroit and the Montreal Maroons.

Marathon is the key word. The NHL is a marathon. International hockey is the 100m dash. Everyone knows the 100m sprint is the darling event of the Olympics. Why? Because everyone consumes it. It only takes 10 seconds. Everyone witnesses it. It's on the grandest stage.

The Olympics might not benefit the NHL in any tangible way. And if the IOC isn't going to fit the associated costs while keeping all the cash, no one should blame the NHL for staying away. But if that issue can be overcome, the NHL could surely benefit from the grandest stage.
at October 19, 2019