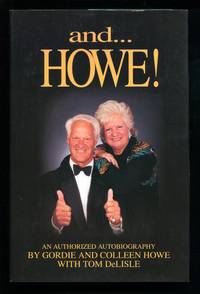 We all know that in 1997 Gordie Howe, then nearly 70 years old, staged a one game comeback with the Detroit Vipers of the International Hockey League.

The idea to stage such a stunt started back in the early 1990s when Wayne Gretzky was about to break Howe's record for most points in NHL history. Howe, at Kings' owner Bruce McNall's expense, followed the team as Gretzky closed in on the record. Over a game of golf between the three, a running joke started about Gordie being in good enough shape to comeback and play a game in 1990.

"It was one of those things that, the more people talked about, the more it seemed possible. Bruce McNall was off the wall, running around saying to people, 'Just think, we might get Gordie out here to play with Wayne!'

"Actually, I think the idea caught Gordie's fancy. We got the impression they were serious about it, but we were naive as to how sincere they really were. I know Wayne was excited, he kept saying 'Gordie could play in his next decade.'

"I believe (Gordie) could have done it. He has never embarrassed himself and if he could have fun doing something, why shouldn't he do it? Doesn't he deserve it?

"Gordie  was under contract to the Hartford Whalers at the time, and they said basically, 'Hey, if Gordie Howe is going to play for anybody, he'll play for us.' So, things fell apart after that and McNall backed off the idea and it was never seriously discussed again. But, yes, it was seriously discussed and considered for a while."

Wow. Now back then teams held on to rights of players seemingly forever after they retired. Some of the players made available on waiver drafts or expansion drafts include big name players who had retired many years prior. So I don't think Howe was truly under contract to the Whalers at the time.

Regardless, if Howe and the Kings really wanted this to happen, it would have happened. One thing we know about Bruce McNall is he was a man who would go great lengths to make things happen. And the story would have been too bright for McNall and the for the NHL to ignore. They would have convinced Hartford to let it happen.

It's too bad it didn't, at least for one game. It would have been one of the greatest moments in hockey history.
at September 22, 2019