The Vancouver Canucks will have new uniforms for their 50th season. 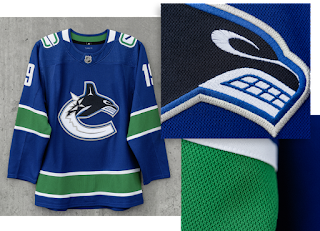 The home and away uniforms are remarkably similar to what you are accustomed to. Aside from minor changes to the shoulder patches, the only noticeable difference is the wordmark "Vancouver" has been removed and the Orca logo re-positioned to truly take the center of the jersey. This is good since the crest was always off-centered.

It took me quite a while to get used to the unconventional addition of the city name above the actual logo. Now it will take me quite a while to get to used to it not being their any more. The jersey, of course, was launched post-lockout around 2006, partly to generate excitement after the lost season due to the labour dispute, but also to capitalize on the coming 2010 Olympics. The world was coming to Vancouver and they would all leave with a piece of BC. Such travelers love anything with Native art and anything with the word Vancouver on it to prove they were at the Olympics. This was one of the smartest decisions the Canucks ever made (they seem to be few and far between sometimes) as they must have cashed in nicely.

At some point after the Olympics we always knew the city name's inclusion would disappear one way or another. Now is as good as any time, I suppose. Especially since all Vancouver fans went out and bought Elias Pettersson jerseys this past season. Time to buy another one to keep current!

The Canucks also have a heritage jersey, with the updated stick-in-rink logo. The logo looks more like a "C" than ever with the thicker green border, and the more I look at it the more I think I might favor it over the Orca logo. I really don't like the striping on the arms and lower body, however. But maybe it will look better in action, but the striping should have white in it, too, in my opinion. 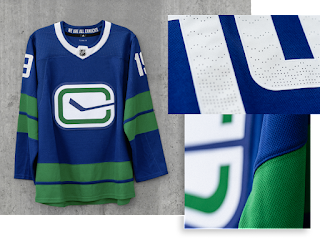 And the Canucks are bringing back the black jerseys from the 1990s skate-logo era. This is not a surprise as it was voted in by the fans this past season for this specific reason. Growing up with the Linden-Bure-McLean Canucks nostalgically makes these my favorite jerseys, though they seem really out of place nowadays with the nicer blue, green and white that team probably never should have strayed from.

Check it all out at https://50thcollection.canucks.com/