Bunny Larocque And The Controversy That Changed The Vezina Trophy 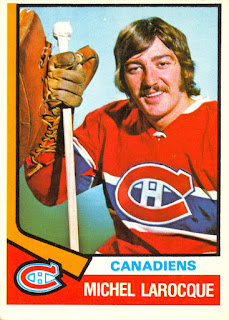 The Vezina trophy is one of the most heralded trophies in all of hockey. Named after early goaltending great Georges Vezina of the Montreal Canadiens, the trophy is given annually to the goalie who was deemed to have had the best season.

When the trophy was first awarded in the 1926-27 season, a year after Vezina died of tuberculosis. How they determined the top goaltender has changed over time, however. Nowadays the general manager of each NHL team votes as to who they believe is the best goalkeeper that season. Originally the trophy was supposed to the goalie with the lowest goals against average. But from 1947-1982 it was awarded to the goaltender of the team who allowed the fewest goals in the regular season.

Now in 1947 that formula could work, given that each team only really used one goalie. But it was still a sore point for some. Jacques Plante won the Vezina time and time again when he played for the powerhouse Montreal Canadiens, totalling seven in his career. Goalies on weaker teams never stood a chance. Look at poor Al Rollins, winner of the Hart Trophy as the league MVP in 1954 with the sad-sack Chicago Blackhawks. Rollins only won 12 of the 66 games he played that season, but played so spectacularly that he was given the Hart. Of course, he did not win the Vezina because he was hung out to dry by his teammates.

Using a more famous Chicago goalie as an example, let's look at the interesting case of "Mr. Goalie" Glenn Hall. When it comes to determining the greatest goaltender of all time, the debate usually circles around three goalies from two different eras - Patrick Roy, Dominik Hasek and Martin Brodeur in more modern times, and Terry Sawchuk, Jacques Plante and Glenn Hall in Original Six times. It's tough to compare Vezina trophy wins, isn't it? A more telling metric back in hockey's golden era would have been First All Star Team nominations. Only three times was Plante given top All Star billing. Hall was named the best seven times!

While this made for good debate points back then, it was not until the late 1970s that the clamor for change finally resulted in the Vezina Trophy being a voted-upon award. The William M. Jennings Award was created to replace the award for the goalie that allowed the fewest goals. No one really cares about the Jennings trophy though. Everyone knows, now anyway, that the top goalie gets the Vezina.

The problem in the 1960s and 1970s was it was now common practice for every team to use two goalies in a season. And many teams were using their back up goalies for significant portions of the season. Foreseeing this, the NHL changed the rules in 1965 so that in goalies must have played in at least 25 games in a season if they were to share the trophy with the starter. From 1965 through 1982 goalies shared the Vezina most years.

At first it wasn't a huge issue because legends were winning. Johnny Bower and Terry Sawchuk shared it one year. Plante and Hall even shared it one year. But once lesser known goalies like Denis Dejordy and Gilles Villemure were winning the Vezina, people started questioning the process. And the discussion began really roaring in the late 1970s when Bunny Larocque, playing the shadows of the great Ken Dryden in Montreal, became a four time Vezina trophy winner.

Oddly enough, the controversy that finally changed the Vezina trophy involved Larocque in the year after Ken Dryden retired. Montreal had another dominant season, and allowed the fewest goals. But they could not settle on a goaltender. Larocque was given the torch initially, playing in 28 games. But a slice on his hand prevented him from continuing on, and then he lost his starter job to rookies Denis Herron and Richard Sevigny. Larocque complained to the press, and was traded to Toronto.

Cue the problem. For a period of time it looked like neither Herron or Sevigny were going to get to the minimum 25 game threshold. Herron broke his collarbone, and Sevigny did not start playing until midway through the season. Somehow there was a real possibility that the Vezina trophy would go to a goalie who no longer played with the team that allowed the fewest goals!

Ultimately Herron and Sevigny both got into 25 games, and all three shared the trophy, even though Larocque was in Toronto. Still, with all due respect to this trio, they never should have won a trophy for the best goaltender. That season that should have gone to Mike Liut who was so good he normally would have won the Hart Trophy as league MVP if it was not for some young hot shot named Wayne Gretzky.

The next season the trophy was reworked so that the managers vote on the top goalies. Controversies still pop up now and again, but at least the winner now truly is worthy of being called the top goalie in hockey.
at April 21, 2019

On one occasion, there two goalies from two separate teams that won the Vezina in the same year. In 1974, Tony Esposito of the Chicago Black Hawks and Bernie Parent of the Philadelphia Flyers shared the trophy.

This was the second season after Dryden retired, not the first one.

Interestingly, the goalie with the best winning percentage AND the best GAA that season didn't have his name on the Vezina Trophy and did not participate in the playoffs. Rick Wamsley had a record of 3-0-1 and a GAA of 1.90 in five games played...