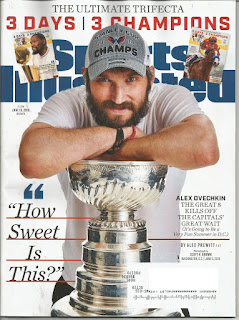 It seems improbable, even for the greatest goal scorer of this generation. But could Alexander Ovechkin be in the hunt for 50 goals in 50 games?

Coming off of back-to-back hat tricks, Ovechkin has a league leading 28 goals in 31 games this season, as of the time of this writing.

50 goals in 50 games is a magical number in hockey, first set by Rocket Richard way back during World War II. It wasn't until the high scoring 1980s that it was achieved again, first by Mike Bossy in 1981 and then three times by Wayne Gretzky, most famously in 1981-82 when he did it in just 39 games. Mario Lemieux and Brett Hull, twice, are the only others to officially accomplish hockey's most amazing feat.

Twice more Lemieux score 50 in 50, but it was considered to be unofficial as it was not accomplished in his team's first 50 games of the season. Injuries forced Lemieux out of the line up, and thus his own personal 50 in 50 is not officially recognized. Same goes for Jari Kurri, Alexander Mogilny and Cam Neely.

But since the mid 1990s the thought of 50 goals in 50 games has been all but forgotten. In fact, scoring 50 goals in an entire 82 game season has become increasingly rare. Since Alexander Ovechkin entered the league in 2005-06 there has only been 20 50 goal seasons, with Ovie having seven of them. Ilya Kovalchuk, Steven Stamkos and Dany Heatley are the only others to have more than one 50 goal season in that time, with two each.

Is it possible that Ovechkin could even catch Wayne Gretzky's record of 894 career goals? The 31 year old has 635 goals, and if he could average 47 goals a season he could match Gretzky's totals by the age of 40.

Playing to 40 or beyond is certainly not unthinkable for any star player anymore, especially for Ovechkin who is one of the biggest, fittest and most durable hockey players ever.

Father time will catch up with Ovechkin eventually, but not yet. He should be able to challenge his best season total of 65 goals this season. Washington is poised to be a league power for at least a few more years, too.

It will be interesting to see how long Ovechkin keeps playing. If he could possibly be in striking range of the Gretzky number, he might just stay. Or is he, like so many of his countrymen, thinking of finishing his career back in Russia?

Regardless, there is a very good case to be made that Alexander Ovechkin is the greatest goal scorer of all time.
at December 15, 2018