A bit of shocking news this past weekend as former LA King and Toronto Maple Leaf Greg Terrion passed away. He was just 58. 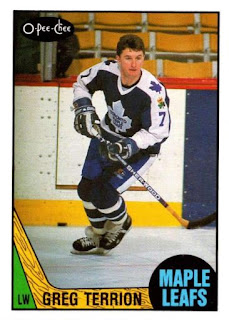 Now Terrion was not the most memorable player in the league, but he was
one of those unspectacular but consistent role players that every team needs in order to win hockey games. Unfortunately for Greg, his steady and consistent play was always with teams that were neither steady nor consistent as he was.

Drafted by Los Angeles 33rd overall in 1980, Greg played 2 years with the Kings before being traded to Toronto in 1982 for a 4th round draft choice. Greg spent the next 6 years in Toronto, playing his final NHL game in 1988.Greg wasn't an overly talented finesse player. He was an above average skater, with really good speed. Combined with good defensive anticipation skills, Terrion's speed enabled him to carve out a nice niche for himself as a checking third line winger and regular penalty killer.Despite his speed and hockey sense, Terrion was unable to translate those abilities to the offensive end of the rink. He seemed to have trouble finding open linemates with crisp passes. In addition his shot was pretty average at best, and he didn't release a shot nearly as often as he probably should have.Physically Greg was only of average build. He did bump along the boards and was always getting in someone's way, but since he was not exceptionally strong, Terrion's physical game was limited by capability, not enthusiasm.Terrion's trivia question claim to fame? He shares the NHL record for most penalty shot goals in one season - two, in the 1983-84 season. Both goals came in home games against Chicago. The first goal beat Tony Esposito on Oct. 15, 1983. The second goal beat Murray Bannerman on Jan. 14, 1984.
at October 01, 2018