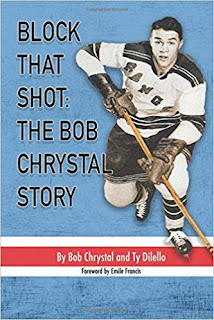 Chrystal, born in Winnipeg in 1930, played two seasons with the New York Rangers. He patrolled the Broadway blue line in 1953-54 and 1954-55, providing a physical presence with his rugged and enthusiastic play. He also added 11 goals and 25 points in 132 total NHL games.Before turning pro, Chrystal was a key member of the Brandon Wheat Kings of the Manitoba Junior League, twice appearing in the Memorial Cup, including in 1949 when they lost a heart-breaker to the Montreal Royals.After his junior career Chrystal spent a year in the USHL with Denver before spending two seasons with the AHL Cleveland Barons. After his two years with Cleveland he was traded to the NHL Rangers.After his two year stint in the Big Apple concluded, Chrystal returned to the Canadian prairie and the old Western (professional) Hockey League. After a year with the Saskatoon Quakers he returned to Brandon to play with the Regals. Unfortunately the Regals moved to Saskatchewan and later St. Paul, Minnesota, so Bob's homecoming was short though sweet.In 1958-59 Chrystal played his final season of serious hockey in his hometown with the Winnipeg Warriors.

Now, all these years later, up and coming author Ty Dilello has helped the 88 year old Chrystal pen his autobiography.

Why do you want to read about a long-ago player you likely never heard of when there are so many other hockey books out every year?

It's because every hockey player has a story to tell. And you may discover that a relative no-name like Chrystal has a more interesting story than some. It's a story that will take you back in time, both in terms of hockey in it's golden age, and life on the Canadian prairies and even in New York City when it was a much simpler time.

The book also features a fascinating collection of newspaper clippings from the Chrystal family collection as well as first hand memories from Emile Francis and Stan Fischler.

Don't dismiss this book about that guy you never heard of before. It might just be the best read of the season.

Block That Shot: The Bob Chrystal Story is now available.