Dwight Schofield is one of the forgotten pugilists of the 1980s.

Schofield, 6'3" 195lb native of Waltham, Massachusetts, was never considered to be in the same class as Chris Nilan, Dave Semenko or Doug Brown, but he knew his role. 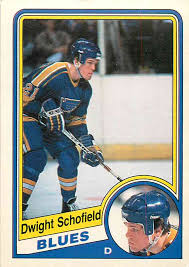 "Management doesn't think I'm worth a damn as a player, so I have to fight to survive," he bluntly stated in his days with the St. Louis Blues.

"I think I could be a decent player here if they didn't want me to be a hatchet-man all the time," he added. "They call it playing physically, but all it really involves is starting fights or defending your teammates. I admit I take pride in the way I fight because, right now, that's the only reason I'm in the NHL. But I don't enjoy it."

"When I was a kid growing up near Boston I was a pretty slick centerman who scored plenty of goals. My father is the one who changed me into an enforcer," he told Howard Berger in the book Of Sticks And Pucks.

" All of my life, my old man made me feel like an idiot because I wasn't an animal like my older brother (Gary). When I was playing Bantam, he was a big, tough defenseman with the New England high school champions. He was the most dominant player in the State. Everyone was scared stiff of him. He could play great defense and he was tougher than nails. On the other hand, I was a smallish forward who to playing hockey, but I think I was as good or better than another bantam in the state."

"For some reason, though, my dad was never satisfied with anything I did. One summer, when I was 15 years old, the Welland Sabres (Tier 2 Jr. A) came to New Hampshire to conduct a try-out camp for the local kids. I was psyched to the maximum and I went out and played my best - had a hell of a camp. During a scrimmage, though, a kid checked me and knocked me down real hard - a real hard hit - and I didn't do anything about it. After the game, my dad came up and said 'Great scrimmage, son, but it meant nothing because you chickened out with that guy.' That was the first in a series of put-downs, but he was my father and I respected his opinion.

"It definitely changed the way I played the game. With St. Michael's (Jr. B) I had to fight and I did well. I started my pro career in Kalamazoo of the International League and I tried sticking to hockey. I got to the Central League with Kansas City but they sent me back to the "I" after two years. I was then that I remember saying I have to make it as a tough guy.

And fight he did. And make it he did. 211 NHL games, most notably with St. Louis but also with Detroit, Montreal, Washington, Pittsburgh and Winnipeg. He scored 8 goals and 30 points and played in 9 playoff games.

But the key number was 631 penalty minutes. And, according to HockeyFights.com, 52 NHL fights.

"I've fought 'em all in my time," he says. "Pretty tough customers, too. My first NHL fight was against Paul Holmgren when he played for Philadelphia. Robert Picard, my defense partner that night, warned me about Holmgren before the game and I remember being a little scared of the guy. He was a legend back then when it came to fighting and the Canadiens didn't bring me up to lead their power play. He ran at me on the first shift and knocked me three quarters of the way over the boards into the penalty box. That got me a little mad. The puck went into the corner and when I turned around he gave me an elbow in the eye. So I figured I'd better take charge of the situation and I suckered him with a right a hand in the side of the head when he came off the boards. It wasn't really a fair thing to do but I wasn't going to let him get the upper hand. He went down to his knees and I could've nailed him again. But I didn't want to take advantage of him while he was down."

Another memorable encounter was with Detroit's Tiger Williams.

"Tiger Williams hammered Mark Reeds - one of our smaller guys. He gave Reeds quite a shiner. So, before our next game with Detroit, coach Demers came up and said he was starting me on left wing, across from Williams. Well, I didn't have to a professor to figure that one out. I knew Williams would figure something was up, too, because it's not every game that I start on left wing - or anywhere for that matter. As the puck was dropped he got his stick up and started yapping at me. He kept it up until I grabbed it away from him, but we didn't get into it very heavily. When I got to the penalty box, I heard someone yell, 'Hey, Dwight, you seen the strap for my helmet?' I looked over and it was Williams calling me. I said, 'No, sorry' and I laughed. I couldn't believe he was calling me by my first name. He was talking to me like a buddy after we had almost gotten into a brawl."

Schofield didn't have a lot of respect for Dave Brown.

"I think he's a jerk. A guy like Al Secord is someone who I look up to because he's tough as hell - probably the toughest guy in the league - and he can also play the game so well. A guy like Brown couldn't put the puck in the ocean from a dock. But he is a tough customer. And he's hard to fight because he's a lefty. Most guys are right-handed and you get used to being punched from one side. With Brown, you think you're moving away from his punch when, in fact, you're moving into it. So he's a little tricky."

Schofield made a living by dropping his gloves, but he was never comfortable with it.

"According to the NHL, I'm a fighter and nothing else. Even if I fell I can play the game properly, I 'll probably never get the chance because of my reputation. I guarantee you fighting is not fun. Especially when you're up against the other heavyweights in the league all the time."
at May 16, 2019