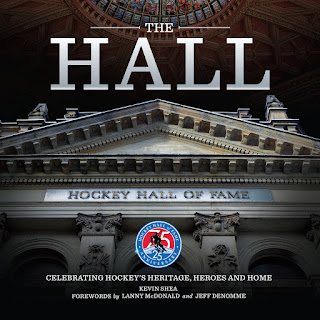 The new hockey season is upcoming, and that also means a new hockey book season.

Kevin Shea writes The Hall: Celebrating Hockey's Heritage, Heroes and Home. On the Hall of Fame's 75th anniversary, and the 25th anniversary of the Hall's move to the famed Bank of Montreal building in downtown Toronto.

The book is billed as "A stunning hardcover book that features dramatic and compelling imagery and uncovers the fascinating history of the Hockey Hall of Fame." It is rare that anything lives up to that type of hype, but this book truly does.

With all the photos and features this book serves as both a page turning coffee table book. But there is enough text in here for even the most studied hockey fan to enjoy at length. By now every hockey fan should know a book with Kevin Shea's name on it will be nothing short of fantastic.

The book covers everything from the earliest visions by the Hall's founders to the ghost that haunts the bank where the Stanley Cup resides. Honoured members are front and centre, including a great story about how a kid working at the Hall tried to give Wayne Gretzky some advice on how to shoot a puck at the interactive shooting display.

You will have to wait until September 10th to pick up the book in stores and online. It is part of the National Treasure Series of books that celebrates the Hockey Hall of Fame. The first, A Century of NHL Memories, had a different aura about it that this new book exceeds.
at August 15, 2018