Pucks On The 'Net: Welcome to the NHL, Australia

It was billed as a battle as the two best teams in the salary cap era. But it wasn't long into the game before it was clear who was the better of the two teams, at least on this particular night. 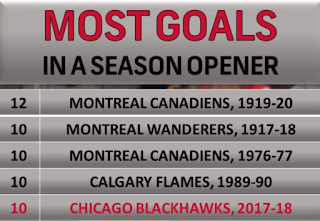 For Chicago it was the 19th time in franchise history that they scored at least 10 goals in a regular season game.

Patrick Kane was nothing short of brilliant in the game with a goal and three assists. Brandon Saad had a hat trick. But it was little known Ryan Hartman who led the way with five points - one goal and four assists. Pittsburgh's Kevin Stevens, back in 1990, is the only player in NHL history to have scored more points in a seasoning opening game.

Alexander Ovechkin scored a hat trick in Ottawa to open the season. It was the 18th hat trick of Ovie's career, which tops all active players. He also passed Guy Lafleur for 24th in the all time goal scoring list.  His next goal will see him surpass Mike Modano.

Connor McDavid scored all three goals in Edmonton's 3-0 victory over the Calgary Flames this week. It was the first time in Oilers NHL history that someone had a hat trick in a season opener.

New Flames forward Jaromir Jagr did not play in that game. He had a great view of McDavid's greatness and came away saying he believed McDavid could score 100 goals in a season. I never thought we'd see someone challenge Wayne Gretzky's goal scoring records, but I have to believe that McDavid is the guy who could do it - even in this low scoring era. I've said it before and I'll say it again - Connor McDavid is the best player I've seen since Gretzky, and that includes Mario Lemieux and Sidney Crosby.

NHL history will be made Washington rookie Nathan Walker plays his first game. Walker is from Australia!

Walker was born in Wales but grew up in Australia since the age of two. Walker left his family to pursue his hockey dreams, moving to the Czech Republic for six seasons. He has played the last four seasons in the American Hockey League
at October 06, 2017