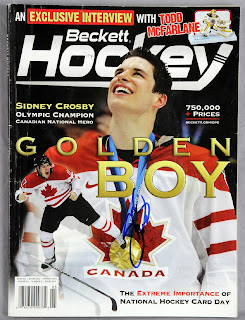 While I concede Crosby's amazing 2016-17 season (World Cup championship and MVP, Rocket Richard trophy, Stanley Cup and Conn Smythe plus possibly another Hart and Lindsay trophies still to come) genuinely catapults him from a top 20 player all time to top ten consideration, he's not quite at Lemieux's level just yet.

Lemieux was the most gifted and talented hockey player ever, bar none. Maybe Bobby Orr could rival him, but no one else.

Sid's talent level is underappreciated by many in this defensive era. But it is his will that make him so good. He simply will not be denied his destiny.

Lemieux's will was nowhere near the same. I am not sure anyone in the top 10 compares with the exception of Wayne Gretzky. Gretzky's greatest asset was not his amazing skill level or his incomparable intellectual understanding of the game, but his passion for greatness. While Crosby's will seems more in-the-moment, if you will, The Great One's passion saw the much bigger picture.

At the beginning of the season I revamped by Top 100 Players of All Time list and could not see Crosby in the top ten.

Now I think it is time to reconsider the list.

The list is a highly subjective personal ranking which considered legacy very high along with ability and accomplishments.

At this time I still cannot see Crosby surpassing Gretzky, Bobby Orr, Gordie Howe or Lemieux at the top of that list. I could see Crosby as high as number eight, but I'd really have to think about going any higher.

Is Crosby a better player than fifth ranked Rocket Richard? It is impossible to compare players from different eras, I do think. Yet Rocket's legacy is so high. And how comparable is Crosby's on ice greatness to that of Jean Beliveau, Bobby Hull and Guy Lafleur?

It's amazing to think at the beginning of the season I had him ranked in the teens, and now I'm willing to consider him as one of the top five greatest players in hockey history.

Of course, Crosby is a work in progress. Is it possible Crosby could continue to climb and catch Gretzky, Orr, Howe or Lemieux?

I would suggest the stark difference in eras will make it impossible for anyone to catch the statistical greatness of the top four. No matter how long Crosby plays, he, nor anyone else, will catch Gretzky's career totals. And the single season marks of Gretzky, Orr and Mario are also likely out of reach.

Crosby turns 30 this summer and, despite his serious concussion injuries of the past, presumably has many good years ahead. But his days of winning scoring titles may be over. The heir apparent - Connor McDavid - has already taken the Art Ross trophy away from Sid.

Of course in this salary cap era it is supposed to be impossible for a traditional dynasty to rise, meaning three or more consecutive Stanley Cups. But if healthy, Pittsburgh's in good shape to contend again. Their keys players are locked up under contract, and they will move goalie Marc-Andre Fleury and his hefty salary this summer.

Maybe Crosby's place in history will see him rise even higher yet.
at June 12, 2017