Daniel Alfredsson's touching retirement saw him exit as the face of the modern incarnation of the Ottawa Senators. 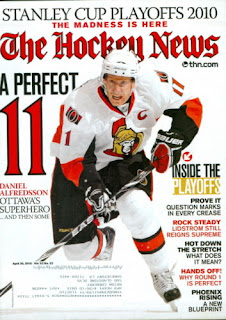 “To be honest, my goal at the time was not to establish myself in the NHL. I didn't have the NHL on my mind,” he said. “My goal was to establish myself in the Swedish Elite League. I was never aware of the draft, really, and I never played on (Sweden’s) World Juniors team. So I think everything worked out great for me and once I got the chance I had to go over and try it.”

Alfredsson grew up playing defense until the age of 14, mostly in a poorly structured youth league with his father, Hasse, as coach. As a teenager he joined Mondal, a junior team, that he finally got fast-tracked to hockey stardom. He was moved to center, largely because he was always up trying to score goals anyway.

By 18 he was with Vastra Frolunda HC, yet still not not NHL radar. The NHL wasn't really on his radar, either.

"The dream in Sweden was always to play for the national team. I didn't know much about the NHL, and it didn't get so much coverage in Sweden."

That goal was finally accomplished in 1995 when he scored 3 goals in 8 games at the World Championships.

Ottawa brought him over for training camp that fall, though neither really knew what was to come. Expectations on both sides were kept pretty low.

"I didn't have a clue about the NHL, but I thought it would be a good challenge to come over.

"No one knew who I was, and I didn't have a clue what to expect. I talked a little to Calle Johansson (who's also from Göteborg) about the NHL, but not really to anyone else. I just thought it would be a good challenge, and if it didn't work out, I'd go back to Sweden."

Alfredsson not only made the team, but he scored 26 goals in that first NHL season, winning the Calder trophy as rookie of the year over the likes of Eric Daze, Ed Jovanoski and Saku Koivu.

Needless to say, Alfredsson never looked back. He beat the long odds and played in 1178 NHL games, scoring 426 goals and 682 assists for 1108 points. He would be captain and the face of the Ottawa Senators. He would have a memorable ovation at the 2012, lead the Senators to the Stanley Cup final in 2007 and Team Sweden to Olympic gold in 2006.

Not bad for a kid from Sweden no one ever thought would make it.