2014 Hockey Book of the Year: Puckstruck by Stephen Smith 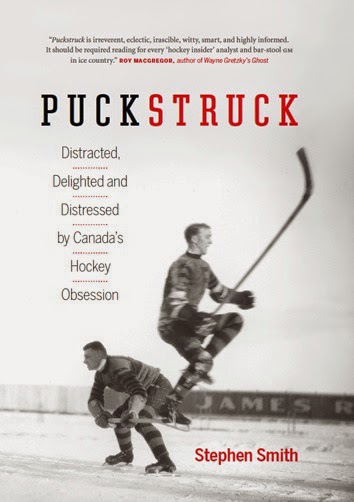 Usually when I write a book review I like to see what others around the internet are already saying about it. I like to get a feel for what the masses think, and what the critics think.

, and that is an absolute shame. Smith and Greystone Books have an instant classic here. It is such a good a book that I declare, without hesitation, that Puckstruck is the 2014 Hockey Book of the Year.

Smith chronicles his "wide-eyed and sometimes wincing wander through hockey's literature, language, and history. On this journey to discover what the game has to say about who we are as Canadians, he seeks to answer some essential riddles. Can hockey make you a better person? What exactly is the Swedes' problem? Where did the hook check go? Should those men really be permitted to keep punching each other in the head? If hockey is the best of us, is it also the worst? Is there hope?"

How can we not like a book about hockey books? Smith has read 100s of hockey books, collected tidbits from the best (I won't hold it against him that he seems to have never have read my three books - hey, no one else has either!) and put his findings together about our game, our country, and ourselves. It is compelling and thought-provoking and downright fantastic!

Don't believe me? Check out some of this incredible acclaim from some of hockey's best authors.

"This is a book after my heart: hockey and literature waltzing together to the music of the author's careful, artful prose. Funny, wistful, smart and unlike any hockey book I've read (although I clearly haven't read as many as Mr. Smith)." —Dave Bidini

"With a masterful lightness of touch, Stephen Smith takes us on a magical mystery tour of all the hockey books worth reading, revealing the Game's joys and darkness, its poetry and cruelty, its inescapable hold on our hearts.Puckstruck is a whirlwind read, as surprising and entertaining as the sport itself. Hockey fans will eat it up." —Roy MacSkimming, author of Gordie: A Hockey Legend and Cold War: the Amazing Canada-Soviet Hockey Series of 1972

"Puckstruck is irreverent, eclectic, irascible, witty, smart, and highly informed. It should be required reading for every 'hockey insider' analyst and bar-stool GM in ice country." —Roy MacGregor

Puckstruck is an excellent read. It is not your typical jock hockey book. It is exactly the type of hockey book we need more of.