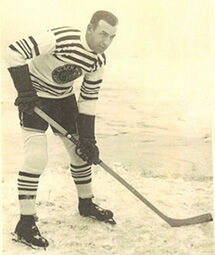 Jim Riley was the first, and to this day the only athlete ever to play professional hockey in the NHL and Major League Baseball.
Riley played 13 years of pro ball, including parts of 2 seasons in the Bigs with the Browns and Senators. He also played 1 season in the NHL, split with the Detroit Cougars and Chicago Black Hawks.
He also played 8 seasons in the PCHA, which was a comparable league to the NHL back in the 1920s.

Andy Kyle played in MLB and in the National Hockey Association. The NHA was a forerunner to the NHL's formation in 1917.

Here is a list of hockey's connections with baseball.
at January 25, 2014