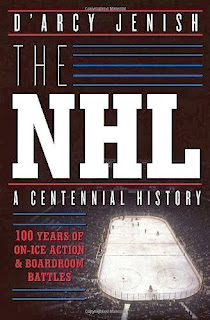 D'arcy Jenish, one of the most thorough hockey historians you will ever read, is back with a new title: The NHL: 100 Years of On-Ice Action and Boardroom Battles

. Jenish previously wrote The Montreal Canadiens: 100 Years Of Hockey Glory, wowing readers with the depth of his research.

Mr. Jenish takes this to a whole new level in his NHL centennial book. The NHL centennial is not until 2017, so Jenish and Doubleday Canada are getting a good head start here. I know for a fact that there are several centennial books already in the works. They will have a tough standard to meet with Mr. Jenish coming in first in line.

I was curious as to why Jenish, the former senior writer for MacLean's magazine, and Doubleday Canada were in such a hurry to release this title. Just reading the introduction to the book reveals why. Jenish is not so much writing the history of the National Hockey League, at least not the story we've always been told. Through his amazing research he has uncovered new truths about the NHL. Essentially he is re-writing history.

Jenish tells a story of two perpetual struggles -- survival and growth. In doing this the author was granted unprecedented access to previously unpublished league files, including revelatory minutes of board meetings. He also conducted dozens of hours of interviews with league executives, including commissioner Gary Bettman and former president John Ziegler, as well as well as owners, coaches, general managers and player representatives.

He now reveals for the first time the true story behind some of the most significant events of hockey history.

"This work tells us a different story," writes Jenish. "It challenges conventional wisdom."

He adds that his book "will give the reader a fly-on-the-wall perspective on the debates that took place within the inner sanctum of the NHL. We can hear Clarence Campbell, Conn Smythe, Frank Selke, Lester Patrick, Art Ross, James Norris and others speaking candidly and openly about the most difficult challenges they faced."

These challenges are turned in the major storylines for the book's purposes.

Stories like how for much of the first 90 years of NHL existence owning a NHL team really has not been a licence to print money, as so many will have you believe. Jenish shows the constant struggles for teams to stay afloat. That struggle almost saw the loss of both Chicago (a fairly well documented fact) and Boston (not nearly so well known) in the height of the Original Six "glory" days.

"There's a surprise on every page," he told the Peterborough Examiner. I don't think he was exaggerating.

In more contemporary times Jenish expertly conducts interviews with Gary Bettman and John Ziegler, getting both men - especially Ziegler - to open up candidly about many issues. As a result Jenish offers us a fresh perspective on the battle with the WHA, modern expansion and the unfortunate labour disputes.


It will be interesting to see how this book is received. Back in 2002 Morey Holzman and Joseph Nieforth, two more excellent researchers, offered what they believed to be a new history of how the NHL was formed with their book Deceptions and Doublecross. It, like Jenish's book, was a fascinating premise but a commercial flop. No one was interested in it.

Will that same affliction bring down Jenish' work? I certainly hope not as there are some incredibly important revelations here. The fact that the book follows the NHL's evolution to today should really help it capture an audience. This truly might be the most important hockey book of it's class.

That being said the book is a heavy, academic read not likely to capture the interest of the casual fan, which, let's face it, makes up the largest segment of hockey fans. But to those hardcore hockey history fans I suspect this book will be hailed as one of the most important books ever written. As the publisher suggests, "this is a definitive, revelatory chronicle that no serious hockey fan will want to be without."

We will see if it is important enough to be accepted by the mainstream as hockey's rewritten history.