Pierre Pilote: Heart Of The Blackhawks 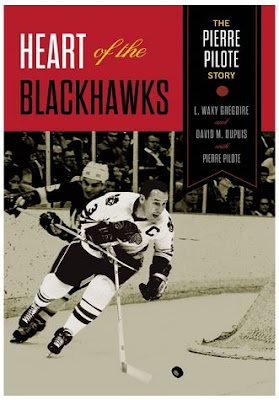 When the ghosts of hockey's past reminisce about the 1960 Chicago Blackhawks, they almost always focus on superstars Bobby Hull and Stan Mikita with Mr. Goalie Glenn Hall also getting a lot of attention.

Not as many people know the story of Pierre Pilote, the Hockey Hall of Fame defenseman who was so instrumental in Chicago's success and 1961 Stanley Cup championship.

That can all change this year as Pilote brings readers rinkside in this compelling biography, Heart of the Blackhawks: The Pierre Pilote Story

. It is an authorized biography co-written with L. Waxy Gregoire and David M. Dupuis.

From his upbringing in northern Quebec in which he played in a Monday night beer league, to captain of the Blackhawks, his captivating story of success has it all. Any sports fan will enjoy the stories of Pilote teaming up with the likes of Bobby Hull, Stan Mikita, Glenn Hall, Moose Vasko, Tommy Ivan, Rudy Pilous, and Billy Reay. This is truly an unforgettable story told by an unforgettable star.

Pierre Pilote was one of the most outstanding defensemen of his time. In the days before Bobby Orr redefined how defensemen played the game, Pilote was already establishing himself as an offensive catalyst.

"Pierre changed the game quite a bit. He was even pre-Bobby Orr. With the defense moving in to be part of the offense, he was certainly influential," suggested Hawks goaltending great Glenn Hall. Pilote was essentially bridging the generation gap between Doug Harvey and Orr.

Pilote's blue line offensive style was due to his metamorphosis from a center to a defenseman in his late teens. He had always grown up as one of the top offensive forwards. His game was very raw and creative, as he never played organized hockey while growing up. But he tried out for and made the St. Catherine's Tee Pee's junior hockey team by switching to defense.

"And then when I started playing defense, I had to learn the position, but I was always thinking offensively, if you know what I mean. I guess it evolved when the Blackhawks started getting guys like (Bobby) Hull and (Stan) Mikita and stuff like that. We became more offensive minded I guess. I was involved in that kind of trend," recalls Pilote.

It took some time for Pilote to make the big leagues. He apprenticed for four seasons with the Buffalo Bisons of the AHL before making it to stay in 1956-57 with the basement dwelling Chicago Blackhawks. By 1961 he was a Stanley Cup champion and later was named team captain.

The Hawks had floundered for years prior to Pilote's arrival. But with the likes of Pilote, Bobby Hull, Stan Mikita and Glenn Hall, the Hawks became Stanley Cup champions in 1961. Pilote scored the winning or tying goal in every Blackhawks victory that year. 1961 pre-dated the Conn Smythe Trophy, but Pilote was the obvious playoff MVP. His 15 points led all players.

Pilote started piling up assists as his confidence improved, and he quickly became one of the best blue liners in the league. The unflappable defender became a master of the give-and-go, a tactic his teammates came quick to rely on. In 1963-64, Pilote recorded 46 assists, tying an NHL record at the time. His best offensive season came in 1964-65 when he scored 59 points, breaking Babe Pratt's record of 57 points by a defenseman.

Although fairly small for a defenseman he played an aggressive game. In fact one year he led the NHL in penalty minutes with 165. His all-round play earned him the Norris Trophy in 1963, 1964 and 1965 and was a first team all star 5 straight times.

Pilote was a great influence for many of the NHL's following generation of defenders.

"Growing up, I was a big Chicago Blackhawks fan so I watched Pierre Pilote and Elmer Vasko, Doug Jarrett and all those guys that played on that team," remembered Larry Robinson, the great Montreal rearguard. "Before Orr, there was Pierre and Doug Harvey. Those were the guys who pioneered defensemen taking the puck and rushing up the ice with it and tried to control the play."

"What Pierre Pilote did for me was show me that a defenseman had to have his head up and the puck in front of him so that he is always ready to move the puck," said New York Islanders standout Denis Potvin. "Starting in my junior career and later in the National Hockey League, that's the way I tried to play: Always ready to make a pass. Pierre was not a huge defenseman but he was one of the best ever at separating a player from the puck and that's very important. A defenseman's two most important jobs are to stop the opposition and generate the offense and I saw Pierre as one of the best at doing that."

For more modern fans, many old-timers also compare today's Scott Niedermayer to Pilote, although Pilote was never as gifted as a skater.

Pierre Pilote's great career was recognized in 1975 when he was elected to the Hockey Hall of Fame. He retired having played 890 regular season NHL games, in which he scored 80 goals, 418 assists and 498 points.
at September 25, 2013