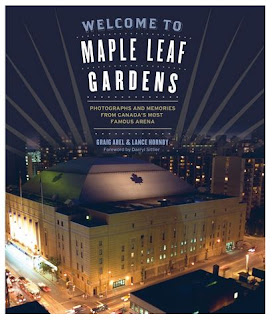 Rome has the Basilica of Saint Peter. India has the Golden Temple. The Middle East has the Mecca in Saudi Arabia.

Canada has no such spectacular place of worship. But there was a time that (at least in English Canada) Maple Leaf Gardens was about as close as we came.

Okay, so that's a bit of a stretch. But for hockey fans of a certain age there was no more hallowed ground than Maple Leaf Gardens. Hockey is the most dominant religion in Canada, after all.

Built in 1931 thanks to the vision and determination of team owner Conn Smythe, the corner of Church and Carlton streets became the centerpiece of hockey excellence not only in Toronto, but from coast to coast (minus Quebec thanks largely to those hated rivals the Montreal Canadiens). Modern day fans may have trouble believing it, but there was a time when Maple Leaf Gardens - now a grocery store/University athletic center - was the home to numerous Stanley Cup championships and many Hall of Fame players.

Graig Abel and Lance Hornby carved out their own little place in the history of the Leafs and in the Gardens. Abel was hired by the team in the 1970s as the official photographer, a post he still holds today. Hornby has been on the Leafs beat for the Toronto Sun nearly as long, since 1981.

The two have teamed together to produce the new book Welcome to Maple Leaf Gardens: Photographs and Memories from Canada's Most Famous Arena

The book is loaded with Abel's eye-catching photography over the years. With every turn of the page the reader is treated to amazing photos - mostly of hockey but also concerts, and other sporting events and professional wrestling. He has done an excellent job of chronicling the history of "the Carlton Street Cashbox.|

But the real highlight of the book is Abel and Hornby's commentary. They treat us to countless of inside stories of the Gardens and the Leafs. I particularly enjoyed learning about legendary public address announcer Paul Morris and an ice cream salesman named Pops, as well as small anecdotes about players and even celebrities.

Maple Leaf Gardens may have been the ultimate hockey shrine, but just like every other rink in the country it is not so much about hockey than community. Same goes for churches and mosques. And anyone who has ever had any connection to Maple Leaf Gardens - even if it was through their radios or televisions back in the day - will love to reminisce with this excellent new book.