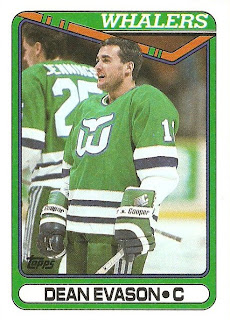 Dean Evason was born and raised in Flin Flon, Manitoba. Like most young hockey players at that time he idolized the home grown NHL hero - the great Bobby Clarke.

There was a little bit of Bobby Clarke in Evason. Both were undersized underdogs who brought a lot of skill and heart to the game. Evason never embraced the physical game like Clarke did, but he wouldn't back down from intimidators either. He fared well in brief skirmishes with Dale Hunter and Doug Risebrough early in his NHL career.

Evason moved to British Columbia to play junior hockey, first with the Cowichan Valley Capitals of the BCHL before graduating to the WHL. There, after a short stint south of the border with the Spokane Chiefs, Evason put together three strong seasons to become one of the best players in Kamloops hockey history. In fact, in 1982-83 he set Kamloops team records (since bettered) for for points (164), goals (71) and assists (93).

The Washington Capitals took notice and drafted Evans 89th overall in the 1982 NHL Entry Draft. After a season in the minor leagues and just 17 games in the NHL, Washington traded Evason and Peter Sidorkiewicz to Hartford in exchange for David A. Jensen on March 12, 1985. It turned out to be a very good trade for the Whalers as Evason would go on to enjoy six seasons in green and white.

Evason was a good skater with excellent vision and good hands. But because he all too often played behind Ron Francis and Ray Ferraro, Evason was never truly utilized as an offensive player in the NHL. He would often play on the third line where he took key faceoffs and killed penalties. He was a very serviceable player in this regard - a coach's delight.

The expansion San Jose Sharks picked him up in 1991. The trade baffled Evason at the time.

"My wife and I got a chuckle," Evason said. "We read an article where EJ [general manager Ed Johnston] said he was looking for a two-way centerman who kills penalties. I thought that's what I was."

Over the next few years he bounced to Calgary, Dallas and a few stops overseas before hanging up the blades in 1999. He finished his NHL career in 1996 with 803 games played, 139 goals 233 assists and 372 points.

Dean Evason has since become a successful coach, including several seasons as an assistant coach back in Washington where his NHL career all began.
at August 15, 2013