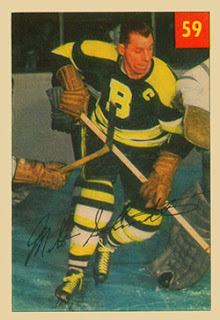 Time eroded the legacy of Milt Schmidt, Mr. Boston Bruin. He last played in 1955, in a long forgotten era that was vastly different than hockey today. With little video evidence of his greatness to preserve his stature, modern fans who do know of Schmidt have to do some heavy research and understanding of the players and the era.

Thanks to the memories of the decreasing old time fans, writers and most importantly on ice peers, Schmidt is still recognized as one of the greatest players in NHL history. In 2000, The Hockey News assembled 50 hockey experts to definitively rank the top players of all time. Milt Schmidt came in at number 27, ahead of the likes of Paul Coffey, Henri Richard, Bryan Trottier, Patrick Roy and Boom Boom Geoffrion.

Schmidt was considered to be the ultimate two-way player of his day, a Trottier or Steve Yzerman of the 1940s. He was small but determined. He was a strong skater and clever puck distributor but also a great finish. As beautiful as he was to watch on the offense, the Bruins long time captain took equal pride in the defensive zone, and was not afraid to get his nose dirty. While he usually played cleanly, one reporter described his play as "angry."

Yet the 1940 NHL scoring champion and 1951 NHL most valuable player might not have ever come to Boston if it hadn't been for a couple of friends in Kitchener, Ontario.


The Bruins had previously signed wingers Woody Dumart and Bobby Bauer. The duo immediately began campaigning for the club to sign the center they played junior hockey with. The B's weren't as interested in Milt but signed him too, and assigned Schmidt to Providence of the AHL. Schmidt joined the Bruins for the second half of the 1936-37 season, and he quickly established himself as the leader of the Bruins.

Schmidt was reunited with the high scoring Dumart and the smooth skating Bauer. Known in the less politically correct era as the Kraut Line (changed temporarily to the Kitchener Kids during World War II), the trio was as complete and balanced a line as the NHL had ever seen. In fact they were so dominant the trio finished 1-2-3 in the NHL scoring race one year.

The Bruins of 1938-39 won the second Stanley Cup in franchise history. It wasn't just the Kraut Line that was responsible for that. Eddie Shore, Dit Clapper, brilliant rookie goalie Frank Brimsek, and veteran scorers like Bill Cowley, Flash Hollett and Roy Conacher made for one of the greatest teams of all time.

Two years later it was Schmidt who led the Bruins to another Cup. After a relative off-season (13-25--38pts in the regular season), Schmidt led the Bruins to their second Cup in three years by collecting five goals and six assists for 11 points in as many playoff games. In this era prior to a MVP award for Stanley Cup playoff competition, it is unanimously agreed Schmidt was the key cog. The Bruins lost NHL scoring leader Bill Cowley to a knee injury in the very first game of the playoffs. Schmidt came through with a hard-checking style that earned him mention as a game star in four of the games against Toronto, then was great in the finals with points in all four games. He led all playoff scorers by 3 points.

That Bruins team might very well have become known as the greatest team ever, however World War II wiped out Boston's chances at establishing a true dynasty. Schmidt and his linemates enlisted, left for the Royal Canadian Air Force near the end of the 1941-42 season, and weren't seen again in Boston until the fall of 1946.

Schmidt was 28 years old by the time he returned. Many other NHL players had difficulty starting their careers again, but Schmidt actually seemed a better player after missing more than three seasons. In his first year back, Schmidt scored more goals (27) and points (62) than he ever would in a career that would cover 16 NHL seasons.

Schmidt was elected Boston's captain after he and the Bruins suffered through a miserable 1949-50 season, in which the club missed the playoffs and Schmidt scored a somewhat average 41 points (19 goals, 22 assists) in 68 games. With the 'C' on his sweater, Schmidt rebounded strongly for 22 goals, a career-high 39 assists and 61 points in 1950-51. He was awarded the Hart Trophy as the NHL's Most Valuable Player, and earned the last of his three first-team All-Star berths.

Schmidt had a strong, second-team All-Star season in '51-52 (21-29--50), and his career-high five playoff goals in 10 post-season games a year later helped Boston to a surprise berth in the Stanley Cup final despite a sub-.500 regular season.

Schmidt didn't complete his final season on the ice. General Manager Lynn Patrick, Schmidt's coach starting in 1950-51, asked Schmidt to move behind the bench in 1954-55, and Schmidt became Boston's coach on Christmas Day, 1954. He'd hold the post through 1960-61, getting Boston to the Cup finals in 1957 and '58, then returned to the bench for four more seasons after a two-year hiatus.

Schmidt succeeded Hap Emms as GM in 1967-68. The B's, already on the rise with the addition of Bobby Orr, took off like a rocket after Schmidt's first big trade brought Phil Esposito, Ken Hodge and Fred Stanfield to Boston from Chicago.

Schmidt, who had been elected to the Hockey Hall of Fame in 1961, oversaw Stanley Cups in 1970 and '72 before retiring as GM. He returned to work as the expansion Washington Capitals' first GM in 1974-75, but left that post a year later, only return to the Boston.