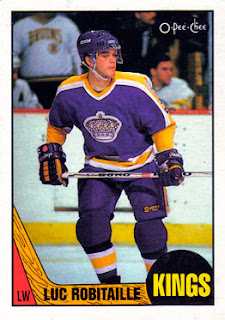 "Cool Hand Luc" Robitaille is one of the most popular athletes on the Hollywood sports scene ever. However when the Los Angeles Kings made Robitaille their ninth round pick (171st pick overall) of the 1984 NHL Entry draft, they didn't expect much from the left winger. The Kings got a bit "lucky" themselves when "Lucky Luc" Robitaille's career blossomed following his draft year.

Robitaille would be returned to junior hockey for the following two seasons where he dominated with the Quebec league's Hull Olympiques. In his magnificent junior career, Luc played in 197 games recording 155 goals, 270 assists for 425 points! 191 of those points came in his final season with Hull, a season in which he was named the Canadian Major Junior Player of the Year.

Doubts of his skating ability still plagued him but he managed to shake that reputation in 1987 as he won the Calder trophy as the National Hockey League's best rookie, outdistancing Flyers rookie goalie Ron Hextall in voting. He also was named to the NHL Second All Star Team in just his first year, scoring 45 times and totaling 84 points.

Robitaille made up for any skating deficiencies with one of the most accurate shots in NHL history. He was a regular leader in shooting percentage, thanks to a number of reasons. He worked himself into high percentage scoring areas, often down low and in tight. Though a defender might have been draped all over him, he always kept his stick unchecked. He would release his shot in the blink of an eye, usually just burying passes and rebounds with no backswing at all.

There was no sophomore jinx for Lucky Luc, either, as he improved his performance in year 2 to 53 goals and 111 points and was named to the NHL's First All Star Team for the first of 4 times.

Robitaille's best season came in 1992-92 when he established NHL records for goals (63) and points (125) by a left winger and was named the Kings MVP as he elevated his game to the highest level as Wayne Gretzky missed half the season with a back injury. Robitaille also served as team captain during Gretzky's absence.

Robitaille, an under-noticed physical player, continued to be almost unquestioningly the league's best left winger for 8 seasons, consistently scoring goals. He scored at least 44 goals in 8 consecutive seasons (only Gretzky and Mike Bossy had better streaks), and also managed to shake his playoff jinx as he became a genuine playoff threat in 1992 with 12 goals in 12 games and in 1993 when he was a major part of the Kings "Cinderella" Cup run.

Just one year after coming so close to winning Lord Stanley's Grail, the Kings missed the playoffs. Robitaille played for Canada's national team at the 1994 World Championship in Italy. It was Robitaille who scored the gold medal winning goal in a shootout, giving Canada its first world championship in 33 years.

Back in Los Angeles changes were afoot following the disappointing playoff no-show. In the biggest trade of all, perhaps the most popular King of all time to Pittsburgh where he would join Mario Lemieux and the league's best collection of sharpshooters. However it wasn't meant to be in Pittsburgh. First Mario announced he wouldn't play that season to rest his ailing back, and then the NHL lock-out resulted in just a 48 game schedule. Luc managed 23 goals and 42 points, and despite scoring 7 times in 12 playoff games, he was dealt to the NY Rangers.

Robitaille's performance in the Big Apple dipped to average only 24 goals in his two seasons. Despite briefly being reunited with Wayne Gretzky, Robitaille wasn't used regularly because his style never really fit in with the Rangers. His lack of quickness was again becoming an issue as he got older.

At the beginning of the 1997 season, Luc was returned to the Los Angeles Kings where he is now a veteran counted on for leadership. With another injury riddled year, he scored only 16 times and many had written off Robitaille, which only proved to be a mistake.

Robitaille found his scoring touch again in 1998-99, lighting the lamp 39 times. He followed that up with seasons of 37 and 36 goals.

One of these goals stood out more than the others. He reached the 500-goal milestone in a game against the Buffalo Sabres on January 9, 1999. Only the sixth left winger in league history to reach the plateau, Robitaille scored the goal in his 928th NHL game, making him the 12th fastest ever to accomplish the feat.

In a surprise move, Robitaille became a un-restricted free agent and opted to sign with Detroit Red Wings in 2001. In his first season with the Wings, Robitaille registered 30 goals surpassing the 600-goal club and captured his first Stanley Cup and the Wings third cup in six years. Interestingly, with his day with the Stanley Cup, Robitaille brought the Cup back to Los Angeles, taking the trophy up into the hills by the famous "Hollywood" sign.

With 557 of his 668 career NHL goals coming in a Los Angeles uniform he retired as the Kings all time leading goal scorer. He later became the fifth King to have his jersey #20 retired, joining Gretzky, Rogie Vachon, Marcel Dionne and Dave Taylor.
at July 13, 2013