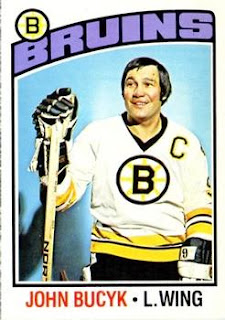 Somehow Johnny Bucyk's legacy doesn't get the respect that it should. The holder of many Boston Bruins records should be remembered as one of hockey's greatest players. Unfortunately he is overshadowed by the following generation of flashier stars, namely Bobby Orr, Phil Esposito, Ray Bourque and Cam Neely.

Johnny grew up poor in the often bitterly cold city of Edmonton. His father died when Johnny was just 11, leaving his mother to raise the children in a meat wrapping factory that paid just 36 cents an hour. Johnny couldn't even afford his own pair of skates until the age of 13, helping to explain to his horrible skating. But Bucyk never let any of these obstacles stop him. Blessed with great size, hockey sense and athleticism, Bucyk willed himself to hockey stardom.

Johnny Bucyk started his pro career with his hometown Edmonton team of the Western Hockey League. After two seasons and setting scoring records, Bucyk graduated to the NHL joining the Detroit Red Wings in 1955. But Bucyk never found his way once with the Red Wings. The Wings of the 1950s were a Stanley Cup powerhouse featuring the likes of Gordie Howe, Red Kelly, Ted Lindsay and many more.

Two seasons later, in 1957, the Red Wings looked to return the one piece that they had previously let go - superstar goalie Terry Sawchuk. The Wings hoped bringing back Sawchuk could be the missing piece to trump the Montreal Canadiens, the team who had usurped the Wings as the class of the league. Boston's asking price - Johnny Bucyk.

Although Sawchuk was never as revered in Boston as he was in Detroit, being traded for perhaps the greatest goalie ever brought an obvious pressure placed on the young Bucyk. He did not disappoint, starring for the next 21 years for the B's and rewriting their record book en route to becoming one of their all time greats.

Given lots of ice time, Bucyk immediately stepped in and established himself as the star the Bruins had hoped for. Starring on the "Uke Line" with fellow Ukrainian-descent players Vic Stasiuk and Bronco Horvath, a former junior teammate. For six years their line was as good as any in the National Hockey League, however team success would not follow. The Bruins only made the playoffs twice.

The 1960s were a bad time for the Bruins, finishing last overall in 5 consecutive seasons. Bucyk, much like Marcel Dionne with the L.A. Kings in the 1980s, was the lone star but he could not carry the team on his back despite physically being the biggest player in the league. Yet "The Chief," as he was tagged due to his appearing to be more Native Canadian than Ukrainian, garnered respect around the league. Johnny toiled with some awful teams in Boston through the 1960s. He was almost the only bright spot on a team that lacked a supporting cast for their star. He average an impressive 20 goals a year during that time. In fact Bucyk scored 20 or more goals in 16 of 23 years in the NHL.

By the late 1960s the Bruins fortunes began to change. Captain Bucyk witnessed the arrival of superstars like Bobby Orr, Phil Esposito, Gerry Cheevers and a strong supporting cast. Despite being the old man on the team, Bucyk remained a top player. That's in spite of the fact he mostly played on what was considered to be the Bruin's second line. When he was teamed with Fred Stanfield and Johnnie MacKenzie, Bucyk was at his most dangerous. He scored 51 goals as a 35 year old in 1970-71. The Bruins finally emerged as the class of the league, winning Stanley Cup championships in 1970 and 1972.

Bucyk continued to play an important role until his retirement in 1978, tallying some of his most productive statistical seasons. Though he retired with 556 goals and 1369 points, then the 4th highest total of all time, it should be noted Bucyk was far more than finesse player. He was tough as nails and a heavy body checker especially noted his devastating hip checks. Despite his aggressive physical play, he was a clean player, as evidenced by his twice being twice named as the NHL's most gentlemanly player.

The long time Bruins captain retired as the Bruins all time leader in games played, goals and points. He was elected to the Hockey Hall of Fame in 1981. Despite all the personal accolades, he always put his team first, perhaps in part explaining his less-than-deserved legacy.

"I've thought of myself as a spear-carrier, not a star, really. I'm not a glamour guy and I've just gone along getting what I could out of every game," said the two time all-star.