The Boston Bruins have had a long tradition of having the greatest defenseman in the game of hockey. Ray Bourque, Bobby Orr, Brad Park, to name a few. But the whole trend started with Eddie Shore. 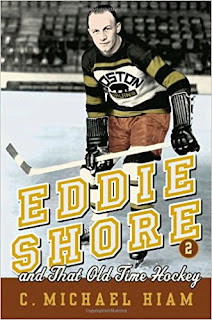 He was born (November 25,1902) and grew up in the farming community of Fort Qu'Appelle, Saskatchewan, and didn't pick up hockey until a relatively late age (18 or so) His father was a strict (but fair) man who laid ground for Shore's toughness later on in his life. Eddie Shore's first sporting loves was baseball and soccer. His brother, Aubrey, was the family hockey player, and it wasn't until Eddie had enrolled at Manitoba Agricultural College in Winnipeg and had been told by his big brother, 'You'll never make a hockey player,'' that he began to take the game seriously.

Shore joined the Boston Bruins in 1926 and went on to personify the most vigorous aspects of the rough and fast game of hockey. His explosive temper was only matched by his incredible talent. While setting up offensive plays he would literally knock down any opponent that got in his way. This of course led to many hard fought and legendary battles. American Hockey League president Maurice Podoloff once observed, ''Eddie Shore did not walk; he stalked'

Hockey of course always has been and always will be a religion in Canada. When the all-Canadian National Hockey League decided to expand to the American cities of New York, Boston, Detroit and Chicago, there was doubt as to its ultimate fate.

"In order to succeed," said Frank Boucher, a star in his own right with the New York Rangers, "the league needed a superstar of extraordinary dimensions."

Eddie Shore was the right man, and at the right time. The "Edmonton Express" put professional hockey on the American map almost single handedly.

Absolutely fearless and unbelievably talented, Shore was indestructible. Perhaps the best way to describe him would be to say he was an early day Gordie Howe who played on the blueline. It certainly wouldn't be a stretch to say that. No one who hit as hard as he did was ever hit harder - or more often - in return. In his heyday, opponents seemed to save all their energy
in order to deal with Eddie Shore. ''He was bruised, head to toe, after every game,'' recalled Hall of Famer Milt Schmidt, a four-year teammate.' Everybody was after him. They figured if they could stop Eddie Shore, they could stop the Bruins.''

Shore's style was all his own. Pugnacious and downright mean, he was also very skilled. '' Most people of the day would skate down the side,'' said Schmidt. ''But Eddie always went down the middle of the ice. People bounced off him like tenpins"

Almost as amazing was his ability to play the entire game! He would average 50-55 minutes a contest. Well, at least in games when he wasn't spending that much time in the penalty box!

Not only was Shore a mean and fearless player but he was also a hard-nosed and savvy negotiator who held out on several occasions for more money. He knew what he was worth and that he was the number one attraction in the league. Bruins coach and GM Art Ross always had mixed feelings about Shore because of the hard times he would give him as a negotiator.

Ross who was a genius always had a show-biz flair, and Shore was a willing accomplice. One year he actually had the other Bruins take the ice first before bringing Shore out last to the accompaniment of ''Hail to the Chief.'' Shore would skate onto the ice in a matador's cloak, which would then be removed, Gorgeous George-style, by a valet.

With Shore, it was always business first, and in 1939, he startled everyone by purchasing the AHL Springfield Indians while he was still playing for the Bruins. What he did was that he played for both Springfield and Boston. This move of course infuriated Art Ross who couldn't stop Shore from doing that so the only way to get rid of the "problem" was to trade Shore. So on January 24,1940 Shore was sold to the NY Americans. A typical week for Shore was a game in Springfield on a Saturday, the Americans on a Sunday, Springfield on Tuesday and Wednesday, and New York on Thursday.

He played against his old Bruins teammates for the first time on March 9,1940. It was his fifth game in six days, despite that he played 35 minutes as the Americans won 4-2 The guy was 38 years old !

Eddie Shore removed himself from the playing ranks after that season, but went on to become a successful (and many times hated) owner in the AHL:

Turner Sports vice president Kevin O'Malley, a Springfield native whose father was the Springfield Indians' PA man for many years, got to see things most Springfield folks never saw. ''After many a practice had ended,'' O'Malley said, ''Eddie Shore would get out there and give his entire team skating lessons. He would critique the form of every player.''

That was a typical Eddie Shore thing.

Even the great Milt Schmidt recognized this. ''He tried to change my style when I was a rookie,'' Schmidt explained. ''He was very much a stand-up skater, and he hated it that I was a stooped-over skater. But he had a theory about everything.''

''He always made the players change the light bulbs in the rink,'' added O'Malley. ''I can still see them out there on those giant circus ladders.''

Anyone who crossed him paid the price. O'Malley especially remembered one occasion. ''There was a concessions guy named Lee Morse. He was in his mid-30s, and he weighed about 220,''
He said something to Eddie one day, and Eddie just knocked him cold.''

There are hundreds of Eddie Shore stories to tell and they are all part of his legend. His toughness was almost legendary even before he had played in the NHL. One time when he played for the Edmonton Eskimos his leg was cut deeply by a skate that required 14 stitches. He was told by the doctor to stay off the leg, yeah right, the next game Shore played full-out and popped all the stitches ending up with his hockey pants soaked in blood.

Or when he played for the Melville Millionaires against Winnipeg in a championship game, his coach told him to not take a penalty no matter what happened. Shore was targeted for the entire game and lost six teeth, suffered a broken nose and a broken jaw and got knocked out a couple of times. After having played a full 50 minutes he was knocked out a third time and was helped off the ice unconscious. He never did draw a penalty...

In the NHL it started right away with his knockdown-dragout fight with teammate Billy Coutu and how he found his own doctor to sew his ear back on. Or when he missed the team train to Montreal, hired a cab to take him there, took over the wheel when he decided the driver wasn't making good enough time, crashed the cab, hiked to a farm house, persuaded the farmer to hitch a sleigh to take him to the nearest train, arrived in Montreal 22 hours after he left Boston, and scored the game's only goal.

And then there is the unofficial record that Eddie holds that is sure never to be beaten - most fighting majors in a single game.

On November 23, 1929 the Boston Bruins were playing the Montreal Maroons. Eddie Shore got five fighting majors in that game, something that has never been equaled to this day, and since a player automatically gets tossed out from the game after three fights, this record seems to stand eternally.

Shore, who's reputation was the only thing more feared than his fists, got into a fight with the Maroons' Buck Boucher. At the completion of the fight he picked up his stick and proceeded to butt end Dave Trottier, who just happened to be the nearest Maroon. Understandably, the Maroon's spent the rest of the night trying to even the score with Shore. Even though he was extremely fatigued and bruised, Shore never once backed down.

The game had to be stopped in the third period so all the blood could be scraped up. Trottier, Siebert and Shore all ended up in the hospital. Eddie Shore had a broken nose, lost four teeth, had two black eyes a gashed cheekbone, cuts over both eyes and a concussion.

The All-Star game is played today, in a roundabout way, thanks to Eddie Shore, even though the circumstances leading to it weren't all that pleasant.

On December 12, 1933 at the Boston Garden, Boston played against the Toronto Maple Leafs. Eddie Shore was tripped by Francis "King" Clancy in the Toronto zone. As he was skating back, he mistakenly checked Toronto's Irvine "Ace" Bailey from behind, it was a devastating body check intended for Clancy as a retaliation for the trip earlier. Bailey fell and hit his head on the ice and fractured his skull, he lay twisted and twitching in a seizure-like state Bailey had two brain operations and hovered between life and death for 10 days. Bailey eventually recovered but his hockey career was finished. Shore didn't show much remorse. He wasn't exactly the touchy-feely type. He was a hockey player's hockey player, perfectly willing to
endure pain if it meant he could inflict his fair share, although the Bailey hit was an accident.
At that time Shore received a record 16 game suspension for the incident.

The injury resulted in the NHL creating an all star squad to play the Toronto Maple Leafs in a benefit game for Bailey and his family. The game was played in Toronto in 1947. The Leafs, wearing jerseys that said "ACE" across them, would end up losing to the NHL All Stars. It would become the annual mid-season All Star Game.

The hit would plague Shore's reputation as a goon and perhaps hindered him from the true acclaim he deserves. The Hockey News recently named him the 10th best player of all time.

He is the only defenseman to ever win the Hart Trophy on 4 occasions. He also was on an NHL all star team 8 times, and was part of two Stanley Cup winning teams in 1929 and 1939.

When the topic of greatest defenseman is brought up, almost everybody says Bobby Orr, a worthy recipient of such acclaim It is such a shame that most people today did not get to see Eddie Shore play. If we had, then perhaps we would all unanimously agree that Shore was the greatest defenseman of all time. Regardless, he is one of the all time Legends of Hockey.

He was a legend as a player and a legend as an owner, and no other individual in the sport's history can make that statement

We could go on mentioning a lot more of the hilarious stories that Shore was involved in as a player and coach, but that could make an entire book. His 978 stitches, 4 broken noses and 5 broken jaws gives us a pretty good picture of his playing style and toughness.
at July 14, 2013

To say that if people would have saw Shore play they would conclude that HE was the greatest defenseman of all time not Bobby Orr....nope.

All we have is grainy black and white film of Shore and the few left that saw him play, one who would be Milt Schmidt. Milt played with Eddie and was GM of the Bruins when Bobby played.Schmidt says time and again Bobby was not only the greatest defenseman but also the greatest player of all time.

In Milt we trust.