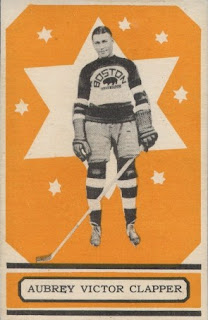 Clapper enjoyed a NHL career that few others have equaled. He is the only NHLer to have been named an All Star at both forward and defense.

Clapper, who was the first player to play 20 seasons all in the National Hockey League, all with the Boston Bruins, was extremely versatile, playing 9 seasons on the right wing, and 11 seasons on the blue line. He credited his longevity to "clean living and rest aplenty."

Clapper, nicknamed Dit for life when a childhood lisp changed his name from Vic to Dit, broke into the league on the famed Dynamite Line in 1927-28 with Dutch Gainor and Cooney Weiland.. By their third season together, the Newmarket Ontario native exploded for 41 goals in 44 games. While he never got past the 22 goal plateau again in his career, he remained a constant goal scoring threat while he played as a forward.

In 1937-38 Clapper was dropped back to the blue line. His unmatched knowledge of the game allowed him to dominate from both positions and become an all star at each position.

"Clapper diagnosed the plays like a great infielder in baseball," remembered Bruins goalie Tiny Thompson. "He put himself where the puck had to come. "

The Hockey News wrote the following in 1948: "Clapper had a simple creed - he fought his heart out, bounced players around and took the same kind of punishment he dished out. Once the game was over, however, he forgot it all and never held a grudge. That's what made him so popular with other players and fans throughout the entire NHL circuit.

A giant of his time, Clapper stood over 6 feet and 200 pounds. He used his ox-like strength to stop fights, although every once in a while he'd let loose on some very unfortunate opponent.

One of the more interesting moments in Clapper's career was the time he punched out a referee and future NHL president.

Normally a bit of a pacifist in terms of fisticuffs, Clapper lost his temper once when Dave Trottier of the Montreal Maroons butt ended Clapper's face with his stick. Referee Clarence Campbell never called a penalty, so Clapper too the law into his own hands and jumped Trottier. Disgusted at Clapper's actions, Campbell began to verbally assault Clapper as he escorted him to the penalty box, calling him a "dirty son of a bitch." After asking the ref what he had said, Clapper had enough punch Campbell right off of his feet. That sort of treatment of an official should have landed Clapper in a lot of hot water, but he only got a $100 fine. Campbell took much of the blame, claiming "I was talking loud when I should have been throwing them into the penalty box."

Clapper retired in 1947 with 228 goals and 3 Stanley Cup rings. He tried coaching the team, but found the position difficult because he was so close to the players.

Following his retirement, Dit Clapper's #5 was quickly retired to the rafters of Boston Garden. Then Clapper was inducted into the Hockey Hall of Fame.

Once called "the Jean Beliveau of his day" by the Canadian Press, Clapper would be compared to Wayne Gretzky today at least for his off ice attributes. Clapper was a handsome man, always dressed with great care and detail, exuding class. His natural charisma made him well liked by fans and media everywhere, not just in Boston.
at July 14, 2013