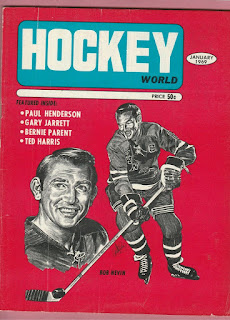 Bob Nevin was a long time NHL right winger, playing in over 1100 career games. He was a fine two way forward who was noted for his gentlemanly play, picking up just 211 penalty minutes in his lengthy career.

Nevin, a Toronto Maple Leaf prospect from the age of 13, played his junior hockey with the Toronto Marlboros from 1954 to 1958. In that time he scored a very solid 210 points in 152 games, including 111 goals.

Nevin's childhood dream of playing for the Leafs came true at the conclusion of the 1957-58 season when he was called up for a 4 game stint. However the next two seasons Nevin would spend apprenticing in the minor leagues with AHL Rochester.

Nevin's first full NHL season was in 1960-61. He had a strong year, scoring 21 goals and 58 points. However his sophomore season would be one not to forget. Though his scoring totals dipped to 15 goals and 45 points, Nevin helped the Leafs capture the Stanley Cup!

"We beat New York in the semi-finals and then we were in a really tough series with Chicago, who had won the Cup the previous year. And we managed to beat them in Game Six at Chicago Stadium, which was a tough feat considering all the noise and atmosphere in that building. So in terms of winning the Stanley Cup and doing it right in Chicago, that was a real big thrill because that was probably the hardest place at that time to win an away game.”

Any Stanley Cup championship team will tell you the only thing harder than winning the Cup is defending it. But the Leafs did that successfully in 1962-63. Nevin actually thought it was easier though.

“The second one was relatively easier, not that any of them are easy. But the second one, I think we beat Montreal in five games in the semi-finals and we beat Detroit in five games in the Finals. So in 10 playoff games, we only lost two so we had a pretty dynamite team that year. We had a pretty strong team and we figured if we kept the team together we could win a number of Cups in the early ‘60s.”

The Leafs did go on to win their share of Cups throughout the sixties, but the team was not kept in tact. Halfway during the 1963-64 season Nevin was traded with Rod Seiling, Dick Duff, Arnie Brown and Bill Collins to the New York Rangers. In return the Leafs got Don McKenney and superstar Andy Bathgate.

Nevin, who was one of the earliest players to wear contacts while playing, enjoyed 7 1/2 seasons in New York. He got more ice time and an increased role than he did on the veteran Maple Leafs team. He scored 20 goals in all but one season, and tapped in a career high 31 in 1968-69.

Nevin looked back on his Rangers days with a special fondness.

“Well, initially it was a big shock (to be traded) because I had grown up in Toronto and a lot of the guys on the Leafs I had played junior with and we had a pretty special relationship with all the guys on that Toronto team. And initially when I got the phone call that I had been traded it was a pretty big blow. It took me a while to adjust from living in Toronto to New York. But I got traded in late ’64 and the fall of ’64, the next year, they made me the team captain. So that obviously was a great thrill to be captain of a team in a six-team league. That was a pretty special time for me in my career.”

The Rangers traded Nevin to Minnesota for Bobby Rousseau for the 1971-72 season. Nevin didn't have his best years in Minnesota. Over 2 seasons he scored just 20 goals and 52 points. In his final year he had just 5 goals and was a -12. Many expected Nevin's career was over.

However the Los Angeles Kings thought Nevin could offer something to their team, and took a chance by selecting Nevin in the annual Reversal Draft. Nevin responded by posting three great seasons, including a career high 72 points in 1974-75 at the age of 36.

“I loved my time in L.A. I had my old teammate from junior and with the Leafs, Bob Pulford, who was the coach and he was doing a real good job. In fact, the one year, we finished with 105 points. We had a really good team. We had Butch Goring, Danny Maloney, Rogie Vachon, and Terry Harper and Bob Murdoch were on defence. Mike Murphy was also playing then. Actually, I really enjoyed my time in L.A. I’m an enthusiastic golfer and, as someone who likes to drive convertibles, it worked out pretty good out there!”

After three seasons in Los Angeles the aging Nevin signed on with the WHA Edmonton Oilers. He played only 13 games in the WHA, for a rather uneventful ending to his career.