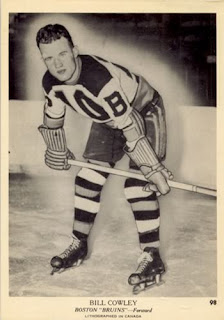 Bill Cowley was very much an early day Wayne Gretzky. He is considered to be the greatest playmaker in hockey while he graced the ice surfaces of the NHL.

Born in Bristol, Quebec in 1912, Cowley played his junior and senior hockey in Ottawa. He wasn't discovered by NHL scouts until he was 21 when he went on tour with the Ottawa Shamrocks in Europe in 1933. The Shamrocks, who went 33-0-2 in the tour, were led by the 5'10" 165lb center who dazzled on-lookers with his dizzying play. Praise wasn't the only thing Cowley got while in Paris that year. He soon would have a pro contract too. He returned to Canada where he relocated to and played senior hockey in Halifax, easily leading the league in all major statistical categories.

Cowley entered the NHL in the 1934-35 with the St. Louis Eagles. Cowley spent the season learning the ropes of the NHL. The Eagles however would only last the one season. Their players were dispersed around the league in a special draft. Boston eagerly picked up the slick stick-handler.

Cowley quickly developed into a superstar in Boston. He became an all star by 1938. By 1939 he led all playoff scorers in scoring as the Bruins won the Stanley Cup Championship. By 1940-41 Cowley was the best player in the league. He earned the Hart Trophy as the league's MVP while winning the scoring title and leading the Bruins to another Stanley Cup. He also set a new league record for assists in one season with 45.

Cowley's greatness was hampered by serious injuries. He missed much of he 1941-42 season with a broken jaw (broken in 5 places). He rebounded to capture his second Hart Trophy in 1942-43 (equaling his own season assist record) but had a fine 1943-44 season cut short by a separated shoulder. The injury cost him a shot at destroying the NHL single season scoring record. He was at 71 points with 6 weeks left. The old record was 73 points (held by Cooney Weiland). Cowley would rebound the next year but had a broken wrist in 1946. He retired at the end of the 1947 season.

At the time of his retirement, Cowley was arguably the greatest player the NHL had seen. He retired with 548 career points, enough for him to claim the title as the NHL's all time leading scorer until 1952. His 353 career assists were also all time highs.

Cowley never really got the notoriety such a fine player should have received. Despite his breathtaking play he was somewhat overlooked by playing for the Bruins at the time he did. In fact, on many nights Cowley was centering the second line as the famous Kraut Line of Milt Schmidt, Bobby Bauer and Woody Dumart remained Boston's key to success for much of Cowley's tenure. Cowley, who teamed often with hard-nosed Ray Getliffe and speedy Charlie Sands before centering sharp-shooter Roy Conacher and "Sudden Death" Mel Hill, would not be overlooked for very long though. Cowley was enshrined in Hockey's Hall of Fame in 1968.
at December 03, 2016