Lost in the shadows of the 1972 Summit Series 40th anniversary is the fact that this September also marks the 25th anniversary of the 1987 Canada Cup.

Ah yes - 1987.  The Soviets with the vaunted KLM Line - Krutov, Larionov and Makarov, with Fetisov and Kasatonov on defense - vs. Gretzky, Lemieux and Messier. The series was the height of the evolution of Canada/Soviet hockey battles. Fifteen years after the Summit the two hockey super powers had blended their lessons together and produced arguably the greatest hockey ever played.

If it was not for TSN/ESPN Classic Canada showing the '87 games, we would not have heard much about this anniversary. Somehow the beauty and the dramatics of the Gretzky to Lemieux winning goal have gotten lost somewhere between Paul Henderson's shot heard around the world and Sidney Crosby's golden goal.

We will explore the reasons for that later. But tonight you can watch game one of the three game 1987 Canada Cup final on TSN. With a NHL lockout looming, this may be the only elite level hockey you will watch for a while. I dare you to watch it and tell me you have seen more beautiful hockey.

Of course, you can always just by the Canada Cup '87 DVD box set too. It should be part of every true Canadian hockey fans' library. 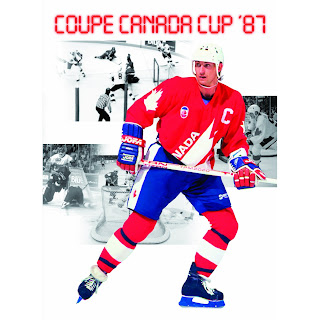 For the first time ever, Canada's complete tournament, featuring all nine Team Canada games and including the dramatic three game final between Canada and the Soviet Union will be available on an exciting new six-disc DVD set that's a must-have for hockey fans everywhere! - Buy The DVD:Amazon.ca - Chapters - Amazon.com
This historic series has some of the greatest superstars playing in the prime of their careers. Legendary players such as WAYNE GRETZKY, MARIO LEMIEUX, MARK MESSIER, PAUL COFFEY and RAY BOURQUE among others face off against the equally brilliant IGOR LARIONOV, SERGEI MAKAROV, VLADISLAV FETISOV and the up and coming VALERI KAMENSKY – all pushing themselves to their personal limits in skill and emotion to win the last significant series between best on best prior to the breakup of the Soviet Union and the release of many Russian stars to the NHL.
MARIO LEMIEUX's goal, assisted by WAYNE GRETZKY in game 3 of the finals to win the Canada Cup was arguably one of the most memorable plays in Canadian hockey history.
Games included:
August 28, 1987: Canada 4 vs. CSSR 4
August 30, 1987: Canada 4 vs. Finland 1
September 2, 1987: Canada 3 vs. USA 2
September 4, 1987: Canada 5 vs. Sweden 3
September 6, 1987: Canada 3 vs. USSR 3
September 9, 1987: Canada 5 vs. CSSR 3, Semi-Final
September 11, 1987: Canada 5 vs. USSR 6, Final 1
September 13, 1987: Canada 6 vs. USSR 5, Final 2
September 15, 1987: Canada 6 vs. USSR 5, Final 3
Buy The DVD: Amazon.ca - Chapters - Amazon.com
Interested in this item? Also check out: Gretzky To Lemieux: The Story of the 1987 Canada Cup
at September 11, 2012

I just picked this video up. Its a classic. Great hockey. My favorite disc is the bonus disc wich features highlights between all the teams in the tournaments. Goalies Dominik Hasek and Kari Takko are featured.