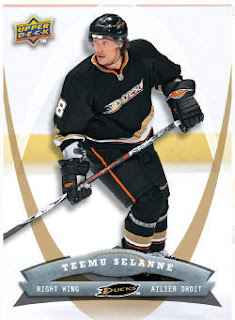 Could this be Teemu Selanne's final week in his hockey career?

What a storied career it is. Selanne is the greatest player in Finnish hockey history. He is a Stanley Cup champion and the NHL's 12th all time leading goal scorer. He is one of the most respected hockey players in all of hockey history.

At the age of 41 he leads the Anaheim Ducks - who also boast NHL MVP Corey Perry - in scoring with 65 points. Clearly he can still play. The question is does he want to still play next season?

Selanne answered such questions in Vancouver today, just like he has everywhere he has travelled to this season:


"I don't want to think too much about the future during the season. I'm going to take two, three or four weeks off and get a better picture. I want to to enjoy this as much as I can and go from there.

"I'm so thankful to play this game for so long and especially when you get older. You start to appreciate that you can still do the things you need to do and that's what I'm so happy about and that's why it's hard to make a decision. There are two sides and there is the passion for the game.

"I enjoy this game more than when I was 28 or 25. That's the only reason I'm still playing. I'm pretty healthy and that's a big factor.

Everyone is hoping Teemu Selanne comes back for at least one more season. And beyond that, the
Sochi Olympics are only 22 months away.

Here's a few fun (all true as they are unbelievable) about the shaggy Finn with the infectious smile:

Teemu Selanne is a man who loves life and loves to have fun. That's how he wants to be remembered on the ice, too.

"I hope people remember a guy who enjoyed this game and had fun every day," he says. "I come to the rink and do my job. I don't even call this a job. The passion, a passionate guy. The guy who always, even in the negative things, tried to find the positive. The guy who enjoyed life. That's the key for my life."
at April 04, 2012