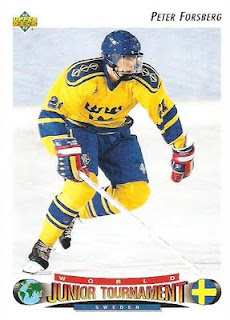 1904 - In the first game of a best-of-three challenge between Winnipeg and Ottawa, a red line was drawn between each set of goalposts to aid the referee in awarding goals. These became the first known goal lines in hockey history.

1988 - Vancouver improved its all time record against touring Soviet hockey teams to 3-0, with a 6-1 win over Dynamo Riga during the NHL's "Super Series 88-89". Brian Bradley paced the Canucks with two goals and an assist.

1992 - Peter Forsberg set a World Junior Championship record with 10 points in Sweden's 20-1 win over Japan. Forsberg ended the tournament with a record 31 points in seven games.

2000 - Mario Lemieux scored a goal and added 3 assists to become the 10th NHL player to get 1,500 career points and Jaromir Jagr had two goals and an assist to reach the 1,000 point plateau as the Penguins won 5-3 against the visiting Ottawa Senators.