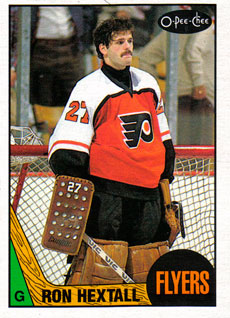 As much as I cheered on Wayne Gretzky's Oilers in the playoffs back in the 1980s, an intriguing anti-hero emerged in 1987 and instantly became another hero of mine - Ron Hextall.

He was certainly a different hero for me, my first "bad guy" I really enjoyed. Maybe I was getting rebellious as I entered my teenage years, but until then everything was back and white, good and bad. I had never cheered for a bad guy before.

Hexy was bad. Slashing at Kent Nilsson. Later he would attack Chris Chelios and brawl with Felix Potvin.

Hextall, at least in those first few years, was fascinating to watch. You never knew when his temper would erupt like a volcano. But I do not think it was all the antics that really attracted me to Hextall's game. Above all of that, he was spectacular goalie to watch, and then there was his revolutionary puck handling, which led to his historic goal scoring.

Here's more on the career of Ron Hextall or watch this tribute YouTube video (set to bad music) below.

As a young Flyers fan it is great to learn about the players before my time. Hopefully members of our current roster will someday be revered in the same way as Hextall or Clark.