I posed this question on Twitter (Follow Me - @HockeyLegends) the other night: Who's Better? Pavel Datsyuk vs Sergei Fedorov. 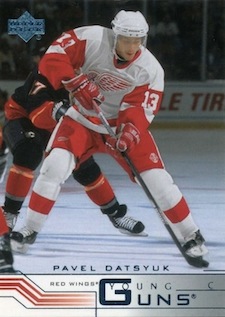 Both are best known as Detroit Red Wings, where they were both human highlight reels and Stanley Cup champions.

The general consensus on Twitter? Datsyuk, perhaps aided by the "living-in-the-now" effect, gets the edge due to more consistent play and leadership. But while Fedorov could be an enigma at times, his peak may have been higher. And that Fedorov was a better playoff performer.

Still, the jury is still very much out regarding this topic, as far as I'm concerned. So I open up the debate here. Using the comments section below, tell me who you think is the better player - Datsyuk or Fedorov? Also feel free to discuss the great Russian centers of all time.

I never saw Fedorov on his great years, so I have to say Datsyuk

I never saw Fedorov playing is his great years too, but after watching several older Red wings games, and talking about his performances on playoffs, I would say Fedorov was better. He could play in any position, even in defense, and did well !!

Datsyuk is better handling the puck, and he thinks really fast, putting anyone in a great chance. But as a Red Wings fan, I would like to see him playing a great playoff someday, because it seems he is hiding at this time !

I'd say Fedorov has the edge in goal-scoring. He was incredible in the playoffs. He outscored Steve Yzerman in Stanley Cup finals games, both in goals and points. Let's see what else Datsyuk accomplishes in his career. Granted, he is the more consistent of the two players.

I second the first comment and the majority of the people on Tweeter. Datsyuk because I've seen him play more. Which leads me to think...

That either hockey fans don't have good memory, or that the mass of fans is renewed more often than it seems, that is, that not many individuals follow hockey over a long period of time. You can't tell that by looking at the numbers (tickets sold, etc) but when individuals speak up, it shows. If that's the case, of course, but maybe it's simply that the fans that would support Fedorov don't use Tweeter.

Ah, some brainstorming on a Thursday morning...

Fedorov was probably the better player, and it's funny how we sometimes forget how big he was. Fedorov skating was as smooth as it gets, effortless, and while Datsyuk seems to own the games whenever he wants, Fedorov could own an entire season.

But if I had to choose between 20 year old Datsuyk or Fedorov to start a franchise with, I'd go with Datsyuk. The stories about Sergei complaining to Scotty about the treatment of the Russian Five, or skipping practices to spend time with Anna Kournikova made me kinda dislike him

And of course, I'll never forgive Fedorov for leaving (even if he suffered a lot more consequences than the Wings). We should have the beautiful simmetry of 19 and 91 hanging at the Joe.

I feel at this point that Fedorov was the better player. He played at a high level for a very long time. Fedorov In my opinion was a better skater and maintained his play. Datsyuk has several more years to go before he can leave that legacy.

Fedorov was a faster skater. He could weave through anything and score quickly. I don't see Datsyuk doing that, but Datsyuk can make goals from out of thin air using finesse and can keep the play going. Now, with the rule changes, the newer style of hockey is different and players have adapted. Also, the league is much more even. In Fedorov's day, few teams could compete with the Red Wings huge financial edge. The teams were much more mismatched so good players could score easier and walk all over the lesser teams back in the day. Most teams couldn't compete against the Wings. Fedorov played against an easier league.

Federov is easily the best. He could and did play as a defender for a brief period during one season. He could do everything and do it well. His back checking was unreal.