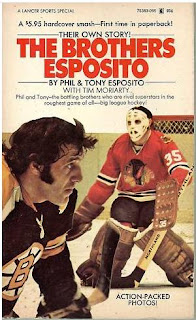 Here is something I never knew before about Phil Esposito and Tony Esposito. According to Harvey Wittenberg's 2003 book Tales from the Chicago Blackhawks:


"Phil was named to the Hockey Hall of Fame in 1984 and recalled to me that he had hoped to finish his career with the Blackhawks and play with his brother Tony. A trade was set in 1978 to send him from the Rangers to Chicago for Jim Harrison, but at the last minute, the New York owner nixed the deal."

Espo back in Chicago, imagine that. Way back in 1967 they could not get rid of him fast enough. In fact, one Wittenberg refers to another story that the Hawks rushed the big trade and paid dearly for it. To refresh your memory the trade was Espo, Ken Hodge and Fred Stanfield to Boston for Pit Martin, Gilles Marotte and goalie Jack Norris. But, according to Wittenberg . . .


"Wirtz told me that Gerry Cheevers was supposed to be the goalie in the deal. Bruins GM Happ Emms made a last minute switch, and Ivan went ahead with it since he was eager to get rid of Esposito. Cheevers went on to lead Boston to two Stanley Cups and was elected to the Hall of Fame while Norris played in only 10 games in two seasons."

But why were the Hawks so anxious to rid themselves of Big Phil? After all, Espo was developing into a nice player and working well as Bobby Hull's center.

Ken Dryden chimed in with is his thoughts in his epic book, The Game:


"The Hawks were an established team, presided over by two great superstars, Hull and Stan Mikita. On and off the ice, its relationships were set, its roles carved out, and in time, little could change because Hull and Mikita were too good, and too young. Hull was the goal scorer, Mikita the playmaker, and the rest, including Esposito, fit in around them as support. On the ice, it was Esposito's job to get Hull the puck; off the ice, an emotional and spirited man, he became the other part of his personality, the funnyman, the clown. So when Hawks general manager Tommy Ivan traded him to Boston, he traded a funny, playmaking 24 goal scorer who had no room to be anything else, and perhaps never would have."

Of course, the rest is history. Esposito would blossom in Boston, becoming the game's greatest goal scorer and shatter Bobby Hull's records in the process. Boston would become hockey's top team. The Blackhawks, for all of Tony's efforts, merely existed.
at October 27, 2013