Who Was Better? Beliveau vs. The Rocket 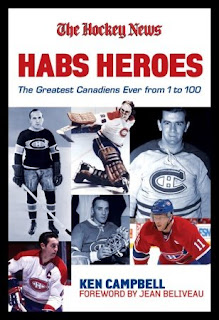 In 2008 The Hockey News unveiled the new book Habs Heroes: The Greatest Canadiens Ever From 1 To 100. Written by senior writer Ken Campbell, THN sought the definitive opinion from a collection of experts to determine who was the greatest player in the history of hockey's greatest team.

While I'm not going to tell you who topped the list, I will say it probably comes as no surprise that the title comes down to a choice ofMaurice Richard and Jean Beliveau.

As many great players (over 40 Hall of Famers!) that Montreal can boast, really these two were the only possible contenders for top billing.

Both came to define the franchise. Richard did that with his unbridled passion and his explosive desire to win. Beliveau did that by embodying class and dignity the Canadiens are still known for. The regal Beliveau oozed loyalty and integrity.

As Ken Dryden says, "The two greatest figures of the Canadiens in the past 60 years are "The Rocket" and Jean Beliveau. One of them evokes love, the other evokes admiration."

In my mind, the choice is surprisingly easy, but that's only because I have spent a lot of time over the years defining what "greatness in hockey" means to me.

Rocket Richard transcended the game like no other hockey player or perhaps athlete, becoming a symbol, a "human flag," for all of Quebec. His impact continues to be felt today in arenas well removed from hockey. His legacy reaches well beyond hockey. When it comes to my definition of greatness in hockey, legacy ranks right at the top of my checklist, even higher than ability. Rocket Richard's legacy is unparalleled, making him, in my mind, the undisputed greatest Canadiens player of all time.

But I also believe Jean Beliveau, and perhaps a couple of others, were actually better hockey players. While Rocket may be the greatest in my books, Beliveau should earn the honour of the best Montreal hockey player.

Anyone who saw the Rocket play will tell you he is unparalleled in his dominance from the blue line in. He may be hockey's greatest goal scorer. But you could call him an offensive specialist. No one raves about his play without the puck. And his legendary temper made him powder keg of a liability at times.

Beliveau was the full package. He could score with an assortment of tricks. He elegantly marshalled the rest of the team's offense with brilliant playmaking. He had imposing size and he masterfully used that to his advantage without resorting to violence.

Comparing ability is always debatable, while comparing the stats and records is more concrete. Here's an interesting set of stats that could have cemented his status the Canadiens greatest player. Beliveau stands second in all time goals scored, 37 behind Richard. He's just 27 points behind Guy Lafleur as the Canadiens all time scoring leader. Also, he ranks second in games played, behind Henri Richard.

Why is that interesting? Beliveau delayed his NHL start by spending two of his most productive seasons playing senior hockey in Quebec City. Had he spent those two seasons in the NHL, it is pretty safe to say Beliveau would top every record in Montreal Canadiens history!

In my mind there is no doubt about each player's status in Montreal Canadiens history. Rocket Richard is the greatest. Jean Beliveau is the best.

By the way, the above image of Richard and Beliveau walking together is courtesy of artist Daniel Parry's website.
at December 03, 2009