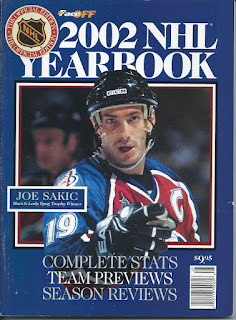 Joe Sakic was born July 7, 1969, in Burnaby, British Columbia, a suburb of Vancouver. The son of Croatian immigrants, young Joe learned English as his second language (Serbo-Croatian was spoken in his home). As a result, he was a very soft-spoken youth, a trait he carried with him through to his hockey career.

Sakic turned a lot of heads during his junior career, culminating in a 160-point explosion and the Canadian Major Junior Player of the Year award playing for the Swift Current Broncos in 1987-88. He made his NHL debut with the Quebec Nordiques the following season. Quebec traded Dale Hunter, their long time tough guy and heart and soul player, to the Washington Capitals to get Sakic in the 1987 Entry Draft.

In spite of that, Joe performed remarkably well. He notched 102 points in 1989-90, not bad for a second-year player under any circumstance, but quite extraordinary considering he did it playing for a team that posted a pathetic 12-61-7 record. The next season, Quebec went 16-50-14 as Sakic scored 109 points, coming just two goals shy of a 50-goal season in the process (a distant second in scoring on the team, at 59 points, was a promising Swedish rookie named Mats Sundin).

Extraordinary numbers in the face of adversity, yet a lot of people didn't even notice. Why? The fact Joe was playing for a terrible team in a small market certainly didn't help matters, but Sakic also proved to be near fanatical about shunning attention, preferring instead to express himself with his trademark wrist shot. Some years later, one former teammate commented that Sakic, who despite being by this time well-established as a team leader, rarely made locker room speeches more profound than, "OK boys, the bus leaves at noon."

Sakic led the Nordiques in scoring in four of their final five seasons, with Sundin besting him by 11 points in 1992-93. The fortunes of the Nordiques changed dramatically after the blockbuster trade with Philadelphia for Eric Lindros, as did the personality of the team. When the franchise moved to Denver and became the Colorado Avalanche, it became known for outspoken, animate players such as Patrick Roy, Claude Lemieux and Peter Forsberg, as well as its storied and often bitter rivalry with the Detroit Red Wings. Yet in marked contrast, it was the quiet Croatian-Canadian who wore the "C" for the Avs throughout.

It wasn't until Joe’s Conn Smythe Trophy-winning performance with the Avalanche in 1996 when he finally got his due from the mainstream sports media. Since then, Sakic has been the team player everyone wants to have. Neil Smith and the New York Rangers tried to lure him away in the 1997 off-season, but Colorado matched the Rangers’ offer sheet – and their multi-million dollar signing bonus up front – to keep him in Denver despite being in the middle of constructing a new arena at the time. It’s worth noting that it was Joe Sakic, not John Elway, who captained a Colorado-based team to a major sports championship first.

He would go on to win another Stanley Cup championship in 2001, the same year he won the Hart and Byng trophies. He was the hero in 2002 when he led Canada to the Olympic gold medal. He was named as the tournament MVP.

Yet a story book ending was not in the cards for Sakic. A debilitating back injury - coupled with a freak snow blower accident - allowed him to play in only 15 games in his final season, and just 44 in the season before that. Sakic desperately wanted to conclude his career with a chance to play in the Olympics in his hometown of Vancouver in 2010, but the injury would not allow him. When it became obvious he would not be able to play in the Olympics, he tried desperately to rehab his back enough to play in late 2009 season farewell games in Vancouver and in Denver. Again, no go.

Fate deals a hard hand sometimes. It's too bad Joe Sakic, like so many hockey players, never got to finish his career under his own circumstances. The classiest player of his generation left the game quietly, but a first ballot Hall of Fame ticket was waiting for him in 2012.

Super Joe Sakic is the man. I named my dog after him. His page needed a comment.

I named my pet rabbit after him! Super Joe. Truly a great player and sportsman.