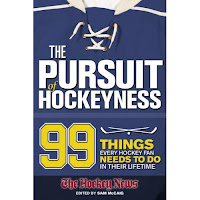 Currently scheduled for an October 27, 2009 release is The Pursuit of Hockeyness: 99 Things Every Hockey Fan Needs to Do In Their Lifetime. There really is not of information about this 225 page trade-paperback as of right now. But it is safe to assume we will see things like going to the Hockey Hall of Fame, see a live game at Madison Square Gardens, visit Montreal, and play shinny on a frozen pond. With some nice photography, I think this book has some potential.

Also scheduled for release on Oct. 27th is THN's Puck Funnies: Hockey Humour, Hilarity and Hi-Jinx. Again, there is very little information out right now, other than it is an identical 225 pages and a trade paperback. 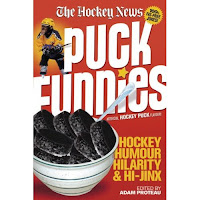 THN and Transcontinental books have put out a few books in recent years, with mixed results. In 2008 they released Habs Heroes by Ken Campbell and Ultimate Book Of Hockey Lists. In 2007 they released THN's Top 60 since 1967
at June 10, 2009

No way! Awesome title. I wish I thought of it.

Their first album was called "Love Junk", which was partially the inspiration for the name of my site, Puck Junk.