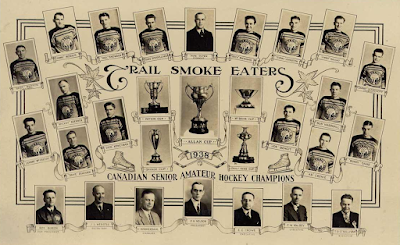 Note the jerseys of the 1939 World Champion Trail Smoke Eaters. That jersey may have saved the life of the Canadian prisoner of war in World War II.

Prior to the start of World War II the Smokies went on a barnstorming tour of Europe and then represented Canada at the World Championships. Upon their successful return to British Columbia, Smoke Eater Mickey Brennan gave his well worn sweater to fan Steve Saprunoff as a souvenir.

Saprunoff later enrolled in the Canadian Air Force, and was called into action in Europe in World War II. He always wore his trusty Smoke Eaters jersey on missions. Even on the day in 1944 his plane was shot down in German territory and he became prisoner of war.

Obviously, being a POW is not an envious position to be in. But Saprunoff was fortunate to have the Smoke Eaters jersey with him, as it earned him a German friend.

The prison guard recognized Saprunoff's Smoke Eaters' jersey. It seems that the guard had seen the Smoke Eaters play in Berlin on Christmas Day, 1938. The guard held the Smokies in high regard, and took pity on his prisoner. The guard would provide extra food for Saprunoff until he and the other prisoners were transferred to another internment camp.

Somehow Saprunoff was returned to Canada with the jersey in tow. It is said he continued to wear the jersey until it literally fell apart.
at April 11, 2019

Email ThisBlogThis!Share to TwitterShare to FacebookShare to Pinterest
Labels: Hockey and war