Christmas 2006 is quickly approaching. If you have a hockey fan on your list, there are some high quality hockey books on the market.Here's a look at the new class of hockey books: 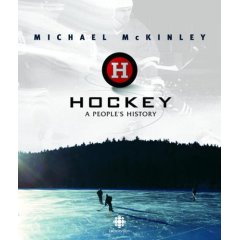 by the same name. Both feature rare footage and information that will impress even the most educated hockey fan. Yet the DVD series and book are not just about hockey. Amazon describes it as "more than just the story of a sport, it is a story of a people, and it is a unique lens through which one can view Canada’s social history – the coming of age of a nation, and the remarkable journey of a sport that has woven itself into our cultural language and fabric." It is so true. If you only give one hockey related item to your hockey crazed fan this Christmas, make it Hockey: A People's History

. I could not wait for Christmas, and I had to go out and buy it immediately. 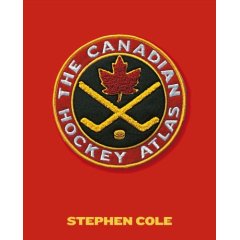 The Canadian Hockey Atlas - Stephen Cole has come with the season's most unique book and it is a smashing success. Amazon describes it as "Part encyclopedic reference source, part mesmerizing history, The Canadian Hockey Atlas is a beautifully illustrated look at hockey from a completely new perspective. Organized into 11 chapters by province and territory, with over 1,000 player entries complete with listings of every hockey town and city, this book shows through history, stories, and memorabilia how the game’s wildly different local and regional strands come together into the pastime that defines Canada." This is another great book that celebrates hockey in its many forms across Canada. 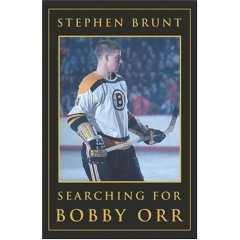 Searching for Bobby Orr - Though hailed by many as the greatest player of all time, the real Bobby Orr remains largely unknown due to his unassuming nature. Stephen Brunt delivers what very likely is the definitive look at Number Four in this unauthorized account. As Amazon's review suggests, Canada’s foremost sportswriter gives us a compelling and graceful look at the life and times of Bobby Orr that is also a revealing portrait of a game and a country in transition. Fans of Brunt's Facing Ali know this author provides works of masterpiece. 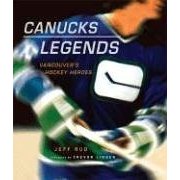 - This is the third installment of the simply spectacular Legends series, following in the footsteps of Canadiens Legends

. The book is huge, with incredible photography and great biographical shorts on many of the Canucks best players and best loved characters of the past four decades. Amazon says: The Canucks come to life through 75 player profiles--Orland Kurtenbach, Stan Smyl, Richard Brodeur, Cam Neely, Trevor Linden, Markus Naslund, Todd Bertuzzi and many others--and over 300 historic and contemporary photos. I'm a Canuck fan, so this is definitely on my Christmas wish list. 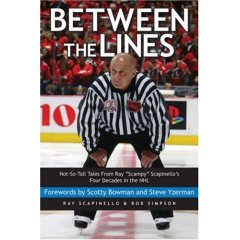 Between the Lines: Not-So-Tall Tales From Ray "Scampy" Scapinello's Four Decades in the NHL

- I think this book will be the most overlooked hockey history book on the market this year, and that would be a mistake. As Amazon's review says: Between the Lines gives a rare glimpse inside the world of hockey from an unusual perspective — through the eyes of one of the game's greatest and best-loved officials. Scampy shares his tales of life both on and off the ice as an official, an inside look at what those players and coaches are really like, what they really say and do, and what the game looks like between the lines. Full of fun stories, perspective on how the game has changed and evolved, and stories and interviews about Scampy from players, coaches, and other officials, Between the Lines is a captivating memoir of a truly unique life in hockey. Gives this book a long look folks, its definitely on my Christmas list.

Other hockey history books of note this Christmas include:

Shorthanded: The Untold Story of the Seals: Hockey's Most Colorful Team

- A fascinating and complete recollection of the California Golden Seals. The Seals still have a small but loyal fan base, but this book is for any serious hockey history buff.

When the Lights Went Out: How One Brawl Ended Hockey's Cold War and Changed the Game

- Gare Joyce takes a look at the Canada - Russia brawl at the 1987 World Junior Championships and how it changed hockey forever.

- This is going to be another overlooked hockey book this Christmas, but is a must have on my list. The accomplishment of the United States Olympic Hockey team during the 1972 Olympic Winter Games has seemingly been one of hockey's most well-kept secrets in this country. This is the story of Striking Silver and its members, which included schoolboy heroes and college All-Americans as well as those plucked from the jungles of Vietnam . I'm sure this will be a fascinating read if only because the story is so truly unknown.

Fred Cusick: Voice of the Bruins: 60 Years in Boston Sports

- A must have for fans of the Boston Bruins, Cusick recalls his fondest memories.

- This book, told from his wife's account, looks at the life and times of the late Carl Brewer.

Fans not looking for hockey history have no shortage of hockey books either this Christmas:

Brodeur: Beyond the Crease

is Martin Brodeur's early autobiography. Shawna Richer followed Sidney Crosby around during his rookie year, and has compiled her writings in The Rookie. NHL Official Guide and Record Book

is always a must have each Christmas. Hockey heavyweight Andrew Podnieks returns with A Canadian Saturday Night: Hockey and the Culture of a Country

There is no shortage of hockey books for kids this Christmas either. Of course, the most important book every hockey crazed kid should have is the old classic The Hockey Sweater

Other good books to teach your kids about hockey history include: The Greatest Goal, A Hero Named Howe, Number Four, Bobby Orr!, The Goalie Mask

or Gretzky's Game. For some good children's hockey fiction check out The Magic Hockey Skates

or any of Roy MacGregor's The Screech Owls series

Don't forget about the fantastic book "Lord Stanley: The Man Behind the Cup" by Kevin Shea and J. Jason Wilson.

Best known for lending his name to the cup that has become the most sought-after sports trophy, but lesser known for his impact on Canada during treacherous political times. Hockey was around before Lord Stanley was appointed Governor General to Canada (1888-1893), but it was he and his family who made it popular on a national level. This is a hockey story as much as it is an important part of our country's history.

I'm looking for a hockey fiction book for a 12 year old boy. Any suggestions? I have checked out the kids books you have posted and they seem to be for a younger age.

I want to recite the prose that the narrator says at the beginning of each documentary for the legends of hockey series at my hockey wind up. Does anyone have a copy of this? If so can you send it to me at ray@raydubois.com?

BTW, we won our city championship this year!! We weren't even supposed to make it to the playoffs.

I'm not certain why you want a hockey fiction book but I would suggest Ken Drydens' 'Behind The Mask', Don Cherry's book as well as Tsun Tsu 'The Art Of War'. Also "Everything they don't teach you at Harvard Business School" would be a good book. In my view for the 99% who don't go to the show hockey is about a personal journey of growth for the child into adulhood. These books are invaluable tools to do just that and will aid the child in both hockey and life.

The best juvenile fiction book on hockey is "Hockey Wingman" by Andy O'Brien.

Long out of print, it's worth buying if you can find a copy of it.

I read it while in middle school and re-read it a few years ago.

Growing up, I loved any book on hockey history by Stan Fischler. I also remember reading Derek Sanderson's autobiography when I was a young teen girl, determined to play for the NHL. What a time of dreams and the love of hockey that was for me!