Jacques Plante's contributions to the game of hockey, as both a player and innovator, are substantial 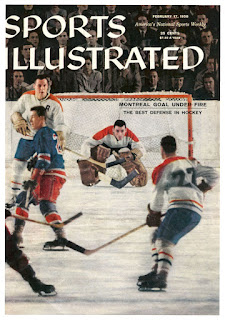 A seven time All Star, Plante won the Hart Trophy in 1962 as the league's most valuable player. He'd win a record seven Vezina Trophies and also 6 Stanley Cups in his illustrious 18 year career. His lifetime GAA of 2.37 is almost as amazing as his 82 shutouts.

Plante played for six teams during his career, most notably the Montreal Canadiens as well as the New York Rangers, St. Louis Blues, Toronto Maple Leafs, Boston Bruins and finishing up his career with the Edmonton Oilers of the WHA at the age of 45.

Plante started many trends which we now simply take for granted. He was the first goalie to signal with one of his arms to his teammates when icing was going to be called. His strong skating ability - something goalies of older eras were not noted for unlike today - enabled him to come out of his net and challenge shooters, thus cutting down the angles. Yet another taken-for-granted play started by Plante was stopping the puck behind the net. Prior to Plante, no goalie would regularly roam around the ice and stop the puck and give it to his defenceman. That was unheard of!

Of course Plante's greatest contribution and innovation was the goalie mask. He wasn't the first goalie ever to use one, but he was the first to permanently adopt a practical face mask. Prior to this time, goalies would bravely (foolishly?) stand in their net and stop flying pieces of frozen rubber with nothing to protect their face. Now goalie masks are even being used by baseball catchers.

Ironically, by hiding his face behind a mask Jacques Plante became one of the most recognized figures in sporting history.

Montreal Canadiens coaching and management staff were dead set against Plante using the mask, but allowed him to use it in practice at times. However during a game against the New York Rangers on Nov. 1, 1959, Plante was hit in the face with a backhand shot by Andy Bathgate. Plante returned, but refused to play without the mask. Coach Toe Blake finally relented and Plante returned to the ice, literally changing the face of the game forever.

Jacques and Toe never really saw eye to eye. That was probably because Blake, like many of the media, fans and hockey people of the day, was a traditionalist, and Jacques was revolutionizing the game. Many of today's goaltending techniques are attributable directly to Plante.

"I rate him and Terry Sawchuk as the best goalies I've ever seen," wrote Jean Beliveau in his autobiography. "With Ken Dryden, Glenn Hall, Bernie Parent and Patrick Roy on the next rung down."

Beliveau had a good chance to watch "Jake the Snake." His long time teammate also played against him in junior hockey. The two were integral parts to the dynastic Stanley Cup championship teams from 1956 through 1960. Plante, who only became the Canadiens regular goalie in 1954-55, won the Vezina Trophy each of the 5 years that the Habs had won the Cup. Despite all the great scorers on what many think is the greatest team of all time, you simply don't win a Stanley Cup - let alone 5 in a row - without great goaltending. Plante, described by Boom Boom Geoffrion as "one of the cockiest, most confident goaltenders I've met," was the game's best during this time.

In 1961-62 Planted won the Vezina Trophy for the 6th time, and also became just the 4th goalie in NHL history to win the Hart Trophy. Roy Worters, Chuck Rayner and Al Rollins had done it previously. Dominik Hasek became the 5th goalie to accomplish the feat nearly 40 years later.

Despite his great play, Plante, a severe asthmatic, was traded to the New York Rangers in a multi player deal that saw Gump Worsley head to Montreal. He played a couple of seasons in New York, but wasn't overly happy there. The Rangers team wasn't too strong, and Jean Beliveau referred to Plante's job there as "a year and a half of rubber therapy."

Plante retired and returned to Quebec, where he worked as a salesman for a brewery. Everyone felt Jacques' retirement was too premature, and Plante would make a comeback. His comeback started under unusual circumstances. He tended net in an exhibition game with the Montreal Junior Canadiens against the touring Soviet national team in 1965. Plante played spectacularly, and the Montreal Forum gave him a great ovation.

According to most statistical sources, Plante was inactive from competitive hockey in his three year retirement, but Jean Beliveau stated otherwise in his autobiography My Life In Hockey. He claims Plante played for the Quebec Aces during that time, which obviously would have kept his skills sharp.

Plante attempted a comeback in 1967 - the first year of NHL expansion. Jacques tried out with the California Golden Seals, but he was ordered to leave training camp once it was decided that the Rangers still owned his NHL rights.

The St. Louis Blues were able to secure Plante a year later though. In the Gateway City Jacques shared not only the netminding duties but the Vezina Trophy by 1969. Plante was then moved to Toronto for three seasons, before joining Boston and WHA Edmonton briefly.

Jacques, like many goalies of his day, was a little bit "off." He was aloof among many of his teammates and the public in general. Like many goalies he had an odd habit. His was a fascination for knitting. While traveling on trains or while sitting in the dressing room, he'd knit every thing from underwear to toques. Some said he did it because the concentration required kept his mind off of hockey. Others said he did it to save money for his family.

Jacques once was asked if goaltending was a stressful job.

"Stressful?" he replied. "Do you know a lot of jobs where every time you make a mistake, a red light goes off over your head and 15,000 people start booing?"

Plante left his stressful life in North America behind and moved to Switzerland. He died and was buried their in 1986 after losing a battle with cancer.

In 837 NHL games, Planted won 435, lost just 247 and tied 145. 82 times he blanked the opponents, and had a tiny 2.38 career GAA. That GAA fell to 2.14 in 112 post season games. He won 71 of those games, and 5 Stanley Cups. He was enshrined in the Hockey Hall of Fame in 1978 and the Quebec Major Junior Hockey League remembers him by naming its top goalie as the Jacques Plante trophy winner.

When it comes to the eternal debate about the greatest goalie of all time, Plante's status remains near the top despite time's natural erosion. Perhaps Ken Dryden, a great goaltender in his own right, puts it best: "There are a lot of very good goalies, there are even a fair number of great goalies. But there aren't many important goalies. And Jacques Plante was an important goalie"
at April 17, 2006

Today, November 1, 2009 even has Wikipedia honoring the great Jacques Plante as he was the featured story on the internet encyclopedia and well deserved! I am a died in the wool Blackhawk fan and have been for over 50 years (and I loved Mr. Goalie Glenn Hall and I consider him one of the three greatest of all time)but the greatest in my mind will always be Jacques Plante! Not only the most important but the greatest! Take a look at his goals against, his shutouts, his championships, his Vezina trophies for me Jacques is the man!..... I know some folks believe Sawchuck was number 1 but I consider him number 2..... It is just my opinion.... Plante set the direction for goaltenders everywhere.... He was an innovator.... He was really fun to watch!...He had to fight management to wear that mask and back then that was no easy task.... Guys like Toe Blake were set in their ways!...(A side note:... I was lucky one night after a game at the old Chicago Stadium. I had sent for a NY Rangers yearbook in 1963 (Plante's first year with NY) and brought it with me to a game the Hawks played against the Rangers.... (To me, Plante was a legend and I wanted his autograph.)... He signed it for me right on top of his picture.... He was a real gentelman!... I lost a lot of my hockey memorabilia in a flooded basement but I still have this yearbook and I treasure it.... The others who signed for me that night were: Arnie Brown, Phil Goyette, Harry Howell, Earl Ingarfield, Don Marshall, Jim Nielson, Camille Henry, Bob Nevin,and Stan Mikita of the Hawks!)...Greg G. (Thanks Joe for letting me ramble.)

Jacques Plante Refined the Goaltending Methods of Bernie Parent and then after that Bernie Parent before He was injured won 2 Straight Stanley Cups in 1974 and 1975 along with the MVP Award for best Player in the Playoffs during those 2 Years! Jacques Plante did more than just encourage the use of a Face Mask He also probably had the best Goaltending techniques and knowledge of any Goalie in History!

I do not know if Jacques Plante got the Order of Canada, but he definitely deserves it. This goalie forged a new breed of masked men who protected the net, and he was always one of my favorites. I saw him play one time against the Canucks, and he let in quite few shots, which was unlike him. The man was legendary with his roaming, playing the puck like a third defense man, a game changer and his masks. Plante helped Parent elevate his career, and inspired many to wear the pads. An oddball hobbyist, he was remembered as knitting toques and more but he was a statesman for the game, and an acrobatic performer that is forever etched in time as one of the elite goalies in the NHL. He won Stanley Cups, Vezinas, played on All Star teams and more, and cannot be forgotten in the passage of time. The hockey gods always roared when he played, and he was the catalyst of change for the better in so many ways.