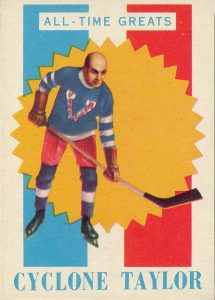 Long before there was such a thing as the National Hockey League, Fred "Cyclone" Taylor was already established as the first legend of hockey.

Taylor grew up in Listowel, Ontario, a small town of about 2,500 people. When he was young Cyclone would skate to school everyday during the five month long winter, and before long it became as natural to him as walking. In 1902, at the age of 19, he began to play for Stratford, and it didn't take long for people to take notice of him. In 1904 he was invited to play in the Manitoba Senior Amateur League. At first Taylor was placed at left wing, but because of his incredible ability to skate, he was eventually moved to old school position known as rover.

In 1907 he joined the Ottawa Silver Seven and was moved back to defense.

"The Ottawa coach felt I could play defense, and the results made him look good. We beat Montreal 8-5, and I scored five goals on individual rushes." said Taylor

The Ottawa Free Press covered the game and a reporter named Malcolm Bryce praised Taylor for his outstanding game writing: "I understand that this boy, Taylor, was nicknamed 'Tornado' when he played in Manitoba. And I further understand that when he moved into the International League they called him 'Whirlwind.' But starting today, based on his performance last night, I am re-christening him 'Cyclone' Taylor."

When asked to comment on his nickname Cyclone stated: "That wasn't the only nickname I got. Once when we played an exhibition game in New York somebody called me 'The Jim Jeffreys of the Ice' after the boxer. Naturally this made me feel great, because I was young at the time and very impressionable. But Cyclone fit the best."

Taylor's excellent play helped Ottawa win the ECAHA championship and subsequently the Stanley Cup. By 1910 he was playing for the Renfrew Millionaires, and making $5,260 a year, which made him the highest paid hockey player at that time.

"If I'd been smart I could just as easily have gotten $10,000, because they wanted me very badly."

The transaction caused a stir right across Canada. He became the highest paid Canadian athlete up to that time and remained so for many years. Taylor scored 22 goals in 28 games over the next two seasons before the team was disbanded.

Cyclone's amazing ability to skate from one end of the rink to the other and score became so well known that it wasn't long before people all over were talking about him. In fact many claimed to have seen him score a goal while skating backwards. When asked about this Cyclone replied by saying, "No, I never did score a goal while skating backwards. I know there are a lot of elderly people in Ontario today who would swear they saw it happen. But it's just one of those stories that was blown up."

From 1912 to 1921 Cyclone played for the Vancouver Millionaires, often playing forward. Taylor fell in love with the west coast, and the west coach loved him right back. He averaged more than a goal per game and led the city to it's only Stanley Cup championship. In 1915 he scored six goals in the Millionaires' three-game domination of Ottawa in the championship series. The unstoppable Taylor's excellence in the series elevated his hero statusright across Canada.

At the age of thirty-six decided to retire from the game of hockey. In his career Cyclone scored and amazing 198 goals in 180 games, and captured two Stanley Cups. In 1945 was one of the original inductees elected into the Hockey Hall of Fame. After playing eighteen years of hockey Taylor claims he never once got a scar or lost a tooth. The two biggest factors that contributed to that was his skating ability and that he wasn't a rough or dirty player.

What many consider one of the best skaters ever to grace the ice, Fred "Cyclone" Taylor died on June 9, 1979, leaving behind a legend of a player who will never be equaled.
at April 09, 2006

I have clippingss that show Ken Mallen played with the Vancouver Millionaires with Cyclone Taylor and beat him in a race. Ken was a figure skater as well as a hockey great. His name is not on the Stanley Cup, and I wonder why, as he was on the Winning Team. Has there ever been anther hockey player that was also a figure skater. I sure would like any information about Ken. I was only 14 when he passed away. My Dad Jim Mallen also was quite a pro. in his time.... Thanks, Dick Mallen

I have been looking through the Internet to learn about this guy, and I can't believe all the information there is. I have a near Mint condition Cigarette Card of Fred Taylor. It looks like it was made in 1910 when he was playing with Renfrew. I want to appraise it somehow, but it is so rare I can't find any info on it. Do you have any ideas about this card? Please email me if you do. Thanks!

Sandro - I'd email you if I could, but you did not leave an email address.

Let me get this straight - you have a mint Cyclone Taylor card from 1910. Now I don't know a whole lot about hockey cards, but I would think you're sitting on a small fortune!

I'd consider taking it to a big sports shop, or emailing them, something like Legends of the Game in Toronto .

They can give you a better assessment.

If you're looking to cash in, just don't do it on ebay though! Sell it through a real auction house or collection agency.

And if you're looking to give it away, I'll send you my mailing address :o)

Ahh Cyclone was a beaut, And to think he and other players of that area did what they did before all of the recent advancements in equipment!

Hi there. I wanted to leave my email address here (Sorry Joe Pelletier). I still have the card if anyone is interested. You can contact me at ttboadd@gmail.com.

Cyclone Taylor gave our founding member Gerry Park the idea to get an old-timers hockey league started. In 1975 Taylor donated his hockey skates & this was our first trophy to the championship team that year in THE Burlington Old-Timers Hockey League. Now over 40 years later we have over 1000 members & Cyclone Taylor to thank.