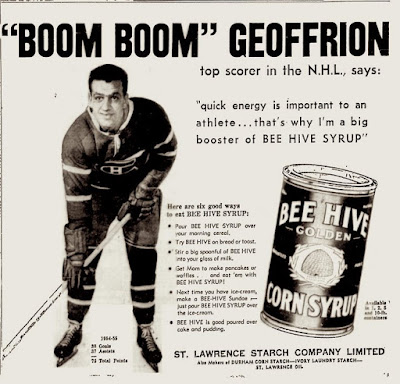 With Maurice Richard headlining a who's who of hockey, the Montreal Canadiens had an outstanding power play for years. But when Bernie "Boom Boom" Geoffrion perfected his slapshot from the point, the NHL was forced to take action. With Richard, Jean Beliveau and Dickie Moore up front and Doug Harvey and Geoffrion on the points, the Canadiens often scored two or even three goals during a single minor penalty, so the rules were changed to allow the penalized player back on the ice after a power play goal was scored.

It was "Boom Boom's" dynamic shot that became his trademark. He perfected the now-common slap shot. Firing little discs of frozen rubber at speeds upwards of 100 mph put fear into the hearts of enemy goaltenders as never seen before.

Geoffrion claimed he was the originator of the slap shot, although others such as Bobby Hull and Andy Bathgate are also recognized as such. As a kid Geoffrion would practice the wild swinging motion by banging pucks on a cold outdoor rink endlessly. By the time he was a junior in Laval he was dubbed Boom Boom by sportswriter Charlie Boire of the Montreal Star. One boom was for the sound of his stick striking the puck; the second was for when his rocketing shot hit the boards.

Geoffrion was more than just a heavy shooter. His all-out style of play and unquenchable desire to win enabled him to win the Calder Trophy in 1952 and the Hart Trophy in 1961. He led the league in scoring twice and was name to the First All Star Team in 1961 and the Second in 1955 and 1960. The fact that he made three post-season All Star teams is actually quite amazing. Geoffrion was a right winger in the same era as Maurice Richard and Gordie Howe.

One of the years Geoffrion led the league in scoring he was actually booed by his own fans. That was 1954-55, the only year Rocket Richard was on schedule to win the scoring championship. However the Rocket was suspended late in the season and Geoffrion surpassed him to win the scoring derby. Geoffrion was widely criticized for not forgoing the extra points and let Richard win his only scoring title.

Habs coach Dick Irvin once said "When Maurice Richard hangs up his skates, (Geoffrion) will take over his place as the greatest player in the NHL." Irvin was bang on, at least in the first year without Richard. That was 1960-6. Bernie will be forever known as the second player to record 50 goals in one season. In addition he added 45 assists for 95 points, then just one shy of the NHL record. The 50 goals of course equaled Richard's lofty mark. Unfortunately for Montreal, that year was the first time in 6 years that the Habs didn't win the Stanley Cup.

Geoffrion never came close to reproducing the 60-61 season in the next three years. Injuries played a role in his lack of success, but insiders suggested he was hurt most by the fact that Jean Beliveau was named captain of the Canadiens instead of him. His slump from his great year made the Canadiens begin to look for a replacement, which they found in a young speedster nicknamed "The Roadrunner" - Yvon Cournoyer.

Geoffrion retired in 1964 to take a coaching position in the Habs farm system, with the understanding that he would be able to move up the ladder and one day coach the NHL team. However Geoffrion and the Habs would have a falling out shortly after.

Following his fallout with the Habs, Boom Boom made a less than spectacular two year comeback in 1966 with the New York Rangers

He would try to stay involved in hockey in his retirement. He had two short NHL coaching stints with the New York Rangers and Atlanta Flames. However severe ulcers forced him away from the bench. The illnesses were so bad that part of his stomach was surgically removed.

Despite the illnesses Geoffrion jumped at the opportunity to have the job he felt should have been his years before. In 1979-80, Geoffrion returned to Montreal as head coach. However the timing was bad. The team had just come off of four consecutive Stanley Cup championships and had lost a few key players. Geoffrion, who had the chance to coach his son Danny that season, stepped down after just 30 games frustrated with management interference.

Geoffrion quickly returned to the sunshine and peach trees of Georgia where he remained until his death. Unfortunately health problems continued to haunt Geoffrion. In the 1990s he survived prostate cancer and macular degeneration of his right eye. Cancerous tumors were found in his stomach in 2006 but the disease had already spread too far for doctors to do anything about it.

Sadly, Bernie Geoffrion, 75, died the night that the Montreal Canadiens were bestowing the greatest honor upon him. At the Geoffrion family's insistance, the team retired his number 5 despite news of his death just hours before the ceremony.

He will always be remembered as one of the charismatic, competitive and greatest right wingers in the history of the game. He however will be remembered even more for his slap shot.
at February 08, 2013

nice guy, met him in atlanta when I did some work at his house. he sighned his picture for me and another for my daughter.

Respectfully, I have to regard Geofferion as selfish for believing he should have been captain over Beliveau. Granted, he did endure much, sacrificed much, deserved the C in any case, but over Beliveau, one of the greats in the game? A true leader is a team-first guy who recognizes better and more worthy leaders and differs to them, so the rest of the team also follows and they all win together.

By the way, Beliveau, in his autobiography, said he voted for Dickie Moore for captain (and was the only one to do so). Said he "loved Geofferion as a brother, but felt he lacked the seriousness to be captain." He then offered to hand his captaincy to Geofferin when he saw his friend's disappointment, but Frank Selke the GM wouldn't let him.

Sport reflects life, Life reflects Sport, even in the comments.

When Boom Boom aspired to succeed the Rocket as captain, it seemed like it made sense. Boom Boom had the same intense personality and a natural successor.

Thing is, with new leadership there often needs to be change. By the time Beliveau took over as captain, the Habs were no longer the underdogs fighting for the throne, they were now the kings of the NHL. You see ghux szhd philosophy in business, in government, in all streams of leadership.

Too bad Boom Boom never had his time.